I selected this film largely because of Gene Tierney. I’ve loved every film that I’ve seen her in, but I’ve barely dipped my movie-watching toes into her filmography. I was even more impressed by this film than those I’d seen previously.

It follows a detective who’s in hot water for beating up on the neighborhood “bad guys” and suspects. The warnings of his superiors don’t stop him from roughing up one more fella, and that fella – the fiance of Tierney’s character – ends up dead.

What I loved most about this film was that it kept me guessing until the very end. None of the plot twists were predictable to me, and it was full of suspense.

The stand-out performance came from an unexpected place, here – Tom Tully as Jiggs Taylor, father to Tierney’s Morgan Taylor. He’s so lovable that (without giving too much away) you can’t help but feel sorry for him.

The only thing that didn’t sit well with me was the ending, which I have mixed feelings about, but I’ll leave that judgement up to you to avoid getting spoilery. 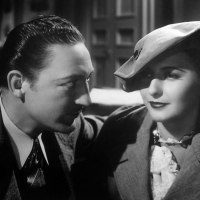