The favorite film:
The Tingler, a 1959 Columbia Pictures horror/sci-fi flick written by Robb White and directed by William Castle

The synopsis:
Dr. Warren Chapin has a solid job conducting autopsies on executed prisoners. On the side, he’s a bit of a mad scientist, formulating theories about fear. He sees fear as a creature living inside every single person – a creature he calls “the tingler,” because it sends a tingling sensation up your spine. He theorizes that our ability to scream suppresses the creature and keeps us from dying of fright? But how do you test such a theory? On a deaf woman, of course. Dr. Chapin meets Ollie Higgins, whose wife Martha just so happens to fit the criteria – the perfect test subject for his theory.

15 thoughts on “Favorite things about… The Tingler” 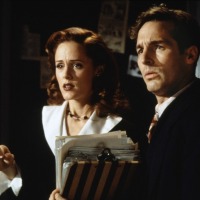