I don’t think there are many people who can hear the name Brady without the familiar tune of “Here’s the story, of a lovely lady…” automatically playing in their heads.

Capitalizing on the lasting corny legacy of The Brady Bunch, some genius decided to make a film remake of the classic television series in 1995.

The film follows Mike and Carol Brady as they struggle to come up with some big money ($20,000 to be exact) in order to pay off their back taxes and save their house from being put up for auction. The Brady kids find out about the tax bill and are also scheming to save their beloved home, which Mike designed himself.

Not everyone wants the Bradys to stay put, though. Larry Dittmeyer, a hateful neighbor to the Bradys, would do anything in the world if it would mean he could get them out of the neighborhood.

One huge reason that I enjoy The Brady Bunch Movie and all of its cheese-wheeliness is that the Bradys appear as time travelers of a sort. They’re a very stereotypical ’70s family living in a totally stereotypical ’90s world. They’re completely out of place in the ’90s and are hilariously clueless.

At one point, two of the kids almost fall victim to carjacking… but not understanding the concept of a “carjack,” they respond with “Well, this is a car but my name isn’t Jack!” Few cornier jokes have ever been spewed in the history of film, and I love it.

The dialogue throughout the film is so purposefully contrived that it’s brilliant for its corn factor. Some of that cheesy dialogue is dedicated to what I’ve dubbed Extremely Obvious Life Lessons with Mike and Carol, in which the Brady parents spell out exactly what they want the kids to take away from their advice.

The dialogue isn’t the only thing that brings the corn. The film’s cast does a great job of exaggerating the mannerisms that were trademarks of the original Bradys. The stompy walking done by the daughters in order to make their hair swing from side to side is particularly funny. (I wish I could find a .gif of it, but apparently I’m the only person who enjoys this slice of cheddar, and I don’t have .gif-making capabilities.)

A couple of odd guest stars add to the fun as well. RuPaul appears as the school guidance counselor, wisely advising Jan with the line of trademark “Girl, you better work!” Davy Jones also appears, bringing the school dance to life with a rockin’ verson of the song “Girl,” which is actually pretty great.

None of those corny elements of the film are the greatest part of it, though. The #1 reason I decided to add this film to the Classics of the Corn hall of fame/shame is Jennifer Elise Cox’s performance as Jan Brady. I mentioned already that the cast exaggerates the sillier mannerisms that were seen in the original series. Well, Cox takes that concept of exaggeration to a whole new level. I’ve actually taken to referring to her character as “Crazy Jan” rather than “Jan Brady” because she is certifiably insane.

Part of Crazy Jan’s brilliance comes from the way the character is written — the inner dialogue she’s given between the voices in her head, her wacky dreams about taking over the world by cutting Marcia’s hair — but Cox pulls off all of that nuttiness perfectly. She is without a doubt the best part of the movie. Case and point: 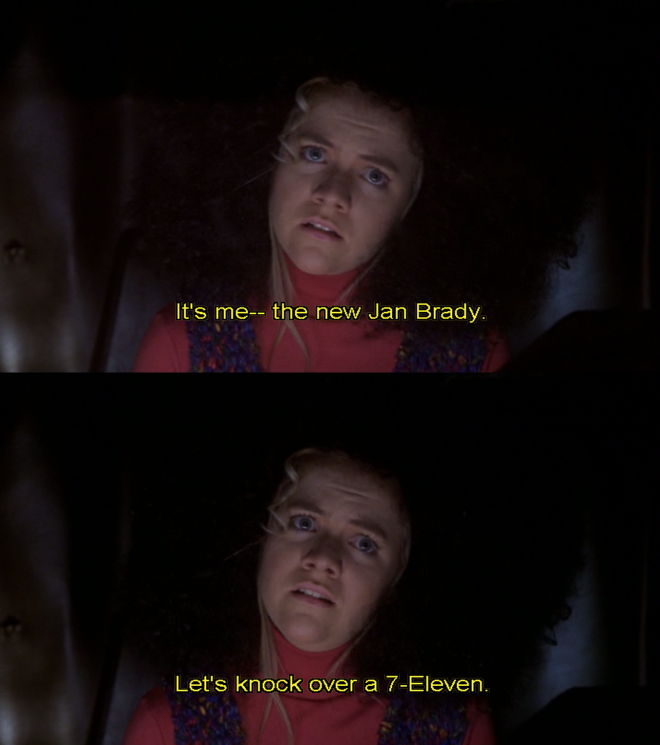 The Brady Bunch Movie isn’t a perfect slice of corn. Some of the subplots (like the cheap jokes about a female friend who is in love with Marcia) simply aren’t funny. But for the most part it’s an incredibly cheesy take on a family that was quite corny to begin with. To use the food analogies I always like to include in these CotC posts, The Brady Bunch Movie took something that was already an entire field of corn and updated it, flooding it with queso dip in the process. 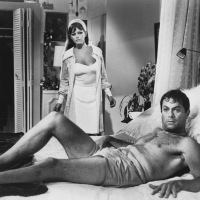 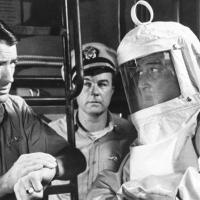