Techno music plays as something mechanical is built in an assembly-line process and keys are punched on a (very dated) computer system.

What’s going on in the opening of Short Circuit? The United States military is building robots, of course. “The most sophisticated robot[s] on planet Earth,” to be exact.

These experimental robots are being tested for combat, and the military is officially presenting them for the first time when, suddenly, a storm hits.

Most of the robots are saved, moved inside from the battle field where they had been showing off their enemy-takedown talents. One robot, though, Number 5, is struck by lightning and suddenly transforms! The engineers think he’ll be fried, but they check him over and nothing seems wrong. All of the robots are then instructed to head back to the station, where Number 5 is accidentally loaded onto a trash truck and escapes the premises.

Number 5 finds himself taking on a distinctly human mentality after the dramatic lightning incident. He becomes self-aware, conscious of his actions and surroundings, and afraid that the military will reprogram him if he makes his way back to the factory.

Luckily, Number 5 may be able to evade the fate that awaits him at the factory, with the help of a kind human stranger named Stephanie (Ally Sheedy).

John Badham (director of Saturday Night Fever, a clip of which is featured in this film) directs 1986’s Short Circuit. The film was written by S.S. Wilson and Brent Maddock (who also wrote Tremors, Wild Wild West and other films together).

Mixing Number 5’s adventures in an unfamiliar society with the hunt for Number 5 by the men from the military lab, Short Circuit provides intentionally cheesy, silly fun. The film recognizes and takes full advantage of the wackiness if its premise.

Before I get into what I loved about this bowl of grated Parmesan, I would like to begin by saying that I absolutely hated Fisher Stevens’ character. Had he played a larger part in the story, my enjoyment of the film would have been ruined. Not cool, Short Circuit, not cool.

With that disclaimer out of the way, let’s get to the good stuff.

The film has a lot of the corny special effects you would expect from an ’80s flick about robots — lots of laser lights/weapons, especially.

But special effects don’t grow most of the corn cobs. That job is reserved for Ally Sheedy’s character of Stephanie – a quirky woman who has a ton of pets (dogs, cats, skunks, birds, ferrets… the list goes on), assumes Number 5 is an alien the first time she sees him, and seems incredibly bemused by the whole ordeal. “HOLY COW, YOU CAN READ!,” she exclaims after watching Number 5 speed-read an encyclopedia. And when she realizes that Number 5 isn’t an alien?:

“I let you tear my house to shreds, and you’re a robot! You’re a machine from that dumb war-lab place! God, I’m so STUPID!”

Number 5 himself is a hoot, too. When he makes a mess in the kitchen, rather than cleaning it up, he describes it in the following way:

“Numerous fragments, some large, some small!”

Making himself comfortable in Stephanie’s home, he attempts to cook, falls in love with classic films (which he then proceeds to quote frequently!), learns how to dance, and serenades Stephanie with his robot rendition of “More than a Woman.” Number 5… IS ALIVE!

The story gets wrapped up with a heartwarming tale of revival from the dead. Convinced that their buddy Number 5 has been blown up by the government, Stephanie and her newly-unemployed ex-robot-researcher friend (Steve Guttenberg) hit the road.

But lo and behold, Number 5 isn’t dead after all! He created a replica of himself which was blown up. He’s still alive, and he’s decided to rename himself as “Johnny 5.” The three ride off into the sunset together, fleeing to middle America, with the robot’s inspirational anthem “Come and Follow Me” singing them on their way. A cutesy, corny ending for a cutesy, corny film. 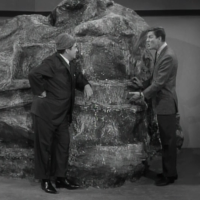 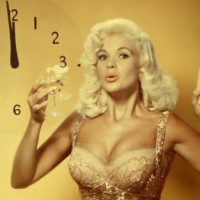