Welcome to this week’s installment of TMP Recommends, where I share five films you should keep an eye out for on TCM over the next seven days. All times are listed in EST and come from the US version of the TCM schedule. Happy viewing!

The Canterville Ghost (1944)
Airing on TCM: July 1, 1:45 pm
In 17th-century England, Sir Simon de Canterville committed a cowardly act. After fleeing a duel, Simon was doomed to die in the castle and walk its halls until a Canterville descendant committed an act of courage. Flash forward to 1943: the Canterville castle (under the ownership of a six-year-old descendant) is deserted, but for its ghostly resident, Simon. When American soldiers begin using the castle as lodgings, Simon may finally have the opportunity to break the curse. Adapted from an Oscar Wilde short story, this fantasy film is a highly enjoyable way to pass the time with a plenty of laughs and surprises. Charles Laughton gives a great performance as the ghost himself.

Häxan (1922)
Airing on TCM: July 2, 6:00 am
Häxan portrays the history of the occult, sharing a series of horrifying scenarios based on actual incident records, from witch trails to demonic possessions. Visually, the film is incredibly stylish and effectively creepy (for the most part). Wonderful use of lighting, special effects and tints. Further adding to the film’s bizarre appeal is the structure, with stories carried out in segments rather than as a more traditional narrative. My sister, who doesn’t typically watch many silent films, caught this one on TCM a few years ago and found it fascinating — so, if you’re into odd/unsettling films, give it a try even if you’re not a silent movie buff!

They Live By Night (1949)
Airing on TCM: July 3, 3:00 pm
Nicholas Ray (In a Lonely Place, Rebel Without a Cause) makes his directorial debut with They Live By Night, a crime drama of lovers on the run from the law. Prison-escapee Bowie was wrongfully convicted and wants to prove his innocence. When he meets Keechie and falls in love with her, the two hope to marry and change their lives for the better… but that’ll be difficult to do with cops hunting for Bowie. Farley Granger and Cathy O’Donnell star as the ill-fated couple in question, both giving great performances. They Live By Night delivers thrills as well as a tear-jerking moment or two.

On the Town (1949)
Airing on TCM: July 4, 6:15 am
On the Town is one of Hollywood’s greatest-ever classic musicals, and my personal favorite. A stellar ensemble cast (Gene Kelly, Frank Sinatra, Ann Miller, Betty Garrett, Vera-Ellen, and Jules Munshin) brings to life the story of three sailors on leave in New York City, and the three women they fall for during their whirlwind vacation. The dance numbers are accompanied by unmistakably catchy songs, and the romances are very sweet to watch. This is the film to turn to if you’re looking for a fun, feel-good musical with top-notch performances.

The Romance of Rosy Ridge (1947)
Airing on TCM: July 6, 7:00 am
Set just after the end of the American Civil War, this film tells a tale of the border-state turmoil that arose as community members held onto their Confederate and Union wartime loyalties, even after the fighting stopped. Thomas Mitchell is Gill MacBean, a farmer with loyalty to the South. Van Johnson is Henry Carson, a wanderer and former soldier with loyalty to the North. Their paths cross when Mrs. MacBean invites Henry to stay with the family for a while. While the more-fascinating exploration of persisting “North vs. South” sentiment after the war gets sort of sidelined in favor of romance and family drama, The Romance of Rosy Ridge is a good watch. I recommend this one for fans of Janet Leigh in particular, since she makes her screen debut as Gill’s daughter. 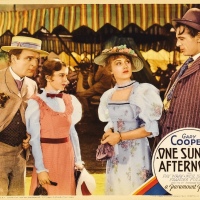