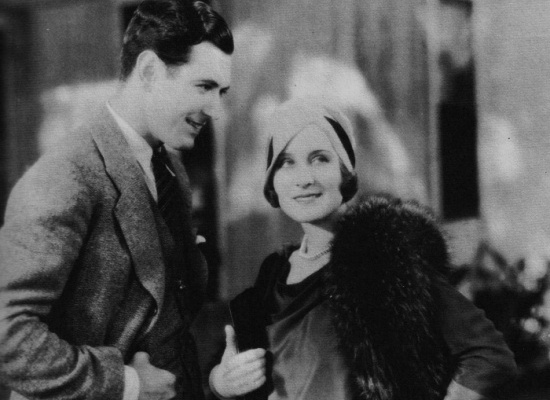 Hotel switchboard operator Dolly (Norma Shearer) is better known by her con-artist nickname: “Angel Face.” Her gig is blackmail. She lures men to her apartment, where she stages the scene for her “husband” (really just a man who splits the profits with her) to walk in on them and demand hush money.

The latest conquest has gone awry, her fake husband deciding to keep all of the money rather than splitting it up. Ever the schemer, Dolly finds a way to steal the money and sets out on her own.

When she meets Steve (John Mack Brown), Dolly is delighted. He has an eye for her, and she has an eye for his riches. She comes to believe he’s wealthy when she oversees a telegram he’s sending to his mother, and hears him talk of a plantation back home.

Will Dolly continue her scheming ways and leave Steve in the dust, or find love and attempt to go straight? A Lady of Chance, based on the story “Little Angel” by Leroy Scott, has the answer. The film was directed by Robert Z. Leonard and released in 1928. I caught it on TCM in November with an original score by Christopher Caliendo.

A Lady of Chance has a lot going for it. From its first title card, it is clear to the viewer that this is going to be a very clever and witty film. “In a certain ‘ritzy’ hotel there was a young lady of many connections,” the opening reads, before cutting to Shearer working as a switchboard operator. Her connections do go beyond the switchboard, as implied by that title card, the viewer soon discovers.

The fun continues as the film progresses, with one title card offering a pick-up line by Steve: “I never realized how uninteresting cement was until I met you.” So charming. How ever could Dolly resist?

Dolly is as sneaky and sassy as they come, and Norma Shearer gives a fantastic performance in the role. Robert Osborne’s introduction to the film described it as a melodrama, but early on there’s quite a bit of humor, watching all of Dolly’s tricks and schemes unfold.

Dolly is a total pro at manipulating people, and Shearer’s portrayal of her is very lively. She’s kept just likable enough for the viewer to be on her side when some complications pop up near the end of the film (the nature of which I won’t spoil).

That melodrama Robert O. mentioned does come into play during the film’s second half, which is every bit as interesting to watch as Dolly’s big-city blackmailing exploits. The mood is still kept fairly light despite the turn toward turmoil, thanks in part to a wonderfully smarmy supporting performance by Lowell Sherman.

A Lady of Chance is a pretty great watch, especially for those of us who love a good dramedy. I’d recommend it in particular for fans of Norma Shearer or Lowell Sherman. The score: 4.5/5