Today’s post is a special one. Not only is it TMP’s second review for Horror Half-Week 2014, but it’s also the return of the mini-blogathon, a tradition upheld by the ol’ pal Todd and I where we review the same cheeser on the same day. Be sure to check out Todd’s review of The Screaming Skull at Cinema Monolith and yesterday’s Horror Half-Week post!

Jenni (Peggy Webber) has just married Eric (John Hudson), and the newlyweds are making a home at Eric’s fancy country estate. The estate is home to an enormous house, peacocks and other wildlife strolling through the yards… and ghosts!

Eric was married once before, to a woman named Marion… who died on the estate after slipping and hitting her head. Mickey (Alex Nicol), the gardener, believes that Marion hasn’t quite made it into the spirit realm yet. Instead, she wanders the grounds restlessly.

Jenni is a bit disturbed by Marion’s lingering influence on Eric and his estate. A self-portrait of Marion hangs inside the house, which along with Mickey’s supernatural beliefs leads Jenni to feel uncomfortable. When she begins to hear strange noises and see skulls around the estate, Jenni becomes fearful that Marion’s ghost may be haunting her.

Alex Nicol (Three Came Back) directs 1958’s The Screaming Skull. The film was written by John Kneubuhl (Two on a Guillotine) and is inspired by Alfred Hitchcock’s Rebecca.

The Screaming Skull openings with a warning that the film may kill you. Free burial services are offered by the producers if you do happen to be scared to death. This information is relayed over a shot of a slowly-opening coffin with a placard inside: “Reserved For You.” This opening is very William Castle-esque, which of course means that I love it.

A good opening — especially one that copies the gimmicks of another director — does not always mean the film will be just as fun. Luckily, in the case of The Screaming Skull, there’s a lot of fun to be had.

The film blends cheese with genuine mood-building. For instance, here’s a portion near the middle of the film in which Jenni is home alone and begins experiencing strange things — hearing sounds, finding a skull in a cupboard, hearing screams which may be from the peacocks who live in the yard (but may also be from ghostly Marion). She has the big, overzealous scream scene that the viewer is expecting (and there are more of ’em throughout the remainder of the film), but in the minutes leading up to that frightful expression of terror, Webber’s performance is ever-so-slightly more subtle and the film takes on an effective sense of light suspense. Peggy Webber’s performance in combination with some shadow play and typical “time for spooks” music (which we’ll get to in a minute) make for a very enjoyable watch.

There were a couple of other elements that stood out to me here: the overdramatic (but suitable, for this type of film) music which runs throughout the film, and the use of “double negative”-style photography during a nightmare sequence. The tunes are appropriately spooky, featuring a female voice making stereotypically ghostly noises. And the nightmare, in which floating heads spout disturbing facts about Marion while Jenni fitfully sleeps, is just plain great.

Director Alex Nicol’s character of Mickey is a nice addition to the film as well. The role is small but definitely packs more weight onto the film’s creep factor. Mickey seems so utterly convinced that Marion is still around and that he can somehow communicate with her. He seems to have been in love with her when she was alive, or at the very least have had an attachment to her. Nicol’s performance is a little corny, but again, right up my alley.

The Screaming Skull opens with a Castle-ish gimmick, and the film definitely belongs to the Castle school of horror: a little cheesy, a little suspenseful, a whole lot of fun. The film isn’t quite as high-quality as any of Castle’s many immensely enjoyable outings, but it’s still a pretty good watch, and at only 68 minutes running, it won’t be a waste of time to anyone who enjoys classic horror cheesers. The score: 2.5/5

A note of warning: The Screaming Skull is in the public domain and unfortunately the quality of the existing print is very poor. The sound is terrible and the print quite fuzzy, though the sound is without a doubt the biggest problem. If you seek this film out on the Internet Archive, be sure to download it rather than stream it and use VLC media player to mess with the audio settings. The preset settings for “ska” (hilariously) and “soft” do a good job of clearing up the muffled dialogue if you don’t want to do the mixing yourself. 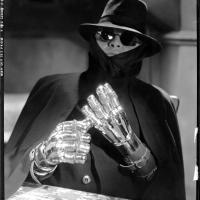