Earlier installments in the series: Part I | Part II 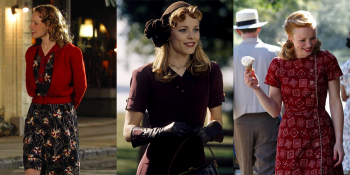 Allie Hamilton – The Notebook (2004)
Designed by: Karyn Wagner
The Notebook is often hailed as one of the most romantic films of the 21st century thus far. Romantic it certainly is, but whenever I watch the film I can’t help being distracted from the plot by Allie’s amazing wardrobe. Allie makes a journey from cautious but fun-loving young lady to sophisticated and conflicted woman in the film, and her wardrobe reflects this. In her young courtship with Noah, her outfits are classic and feminine but with a youthful zest in the form of, for instance, bold patterns. Flash forward to when she and Noah have been forced apart and she is planning to marry another man, and her outfits are much more “grown up” – smart, tailored dress suits and fashionable accessories, such as the hat pictured in the middle photo to the left.

Designed by: Howard Greer
Susan’s clothes are minimalistic – so as not to clash with the leashed leopard at her side, of course. But the fun of them is in the details: eye-catching, shimmery fabrics; ruffles on the bodice of an otherwise very simple gown; a perfectly assembled assortment of accessories, such as a bold hat and a short scarf around the neck. Susan’s wardrobe isn’t quite as exciting or showy as some of the others that have appeared in this series, but it suits her character well and she always looks amazing.

Esther Smith – Meet Me In St. Louis (1944)
Designed by: Irene Sharaff
Esther’s wardrobe is just plain beautiful. Perfectly suited to the period in which the film is set, perfectly tailored to fit Esther, and always extremely fashionable these are the types of outfits that inspire lists such as this. Whether in sophisticated stripes, deep solid shades or lovely pastels, she always looks put-together and perfect. Neck ties and large bows are a staple detail for her daytime dresses, while her party dresses for more formal occasions feature sweetheart necklines and puffed sleeves. While definitely very proper to suit her family’s status and reputation, Esther’s clothes also feature decidedly young details that keep the outfits suited to her age and romantic spirit as well.

Designed by: Edith Head
Jo Stockton’s fashion is nothing to scream about when she’s first discovered by a fashion photographer at the book store where she works. She’s still adorable and looks very smart in her black-and-brown combo, but this look pales in comparison to the beautiful gowns that she wears later in the film. When photographed by Dick Avery, Jo’s fashion is bound to become much  more extravagant. She’s the epitome of grace in pastels, elegant patterns, richly colored gowns, over-the-top accessories and those trademark long white gloves.