When the men lose radio contact with Earth, think they can still make it home. After plotting their journey, they set out for Earth, but unexpected turbulence finds them traveling at much faster speeds than expected.

When they crash-land, the men find themselves in a snowy valley. Have they made it back to the Earth they know, or are they somewhere entirely unexpected?

Offering up a story rooted in Cold War paranoia that seems frighteningly relevant today, World Without End was written and directed by Edward Bernds.

World Without End begins, eye-catchingly, with a bomb exploding! As with many mid-century sci-fi pictures, the special effects are a treat to see here, some more effective and realistic than others.

Disembarking from their gadget-laden spacecraft, the men have landed on what they think is an “Earth-like” planet, with varied climates and monstrously large/hilariously designed mechanical spiders.

I gave a less detailed synopsis here than the one I encountered on Warner Archive’s streaming service, so quit reading now if you’d like the film to remain mysterious. Warner’s blurb spoiled me on the fact that the planet they’ve landed on is, in fact, Earth — the Earth of the future, in the 2500s.

The human population is sparse following nuclear war. As Timmek (Everett Glass) describes it: “Armageddon. The slaughter of humanity. An atomic war no one wanted, but which no one had the wisdom to avoid.” Those who managed to survive live underground, hiding from caveman-esque, radiation-affected creatures living on the surface.

The film would have been more unsettling had I gone into it without this knowledge, since the men do encounter the monster spider and a gang of killer cavemen prior to discovering the truth. Still, familiar sci-fi themes like time travel and man’s self-destruction are put to great use here.

The real pull of the film for me, however, was its visual appeal. The high-tech underground fortress in which the remaining humans live is decorated with geometric archways. The set design is fantastic, and of course, the future-people wear appropriately futuristic outfits. It’s all brilliantly shown in Technicolor CinemaScope.

World Without End offers an intriguing story made ever more captivating by the somewhat-silly special effects and well-crafted visual elements. Recommended. 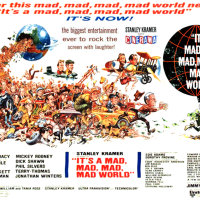