Lee Taylor (Lee Tracy) is a snoopy, snarky New York reporter investigating a strain of serial murders by a man only known as the “Moon Killer.” There have been six victims – all strangled, disfigured by surgical instruments and cannibalized in the middle of full moon nights.

Police suspect one of the doctors at the Academy of Surgical Research, where instruments matching those used in the crimes can be found. Each doctor there is suspected for a different reason, because each has an odd hobby or personality trait. Dr. Wells (Preston Foster) allegedly studied cannibals in Africa; Dr. Haines (John Wray) is into frisky magazines and is believed to have cannibalized a fellow traveler while at sea; Dr. Rowitz (Arthur Edmund Carewe) likes to analyze moon rays; Dr. Duke (Harry Beresford) is a boisterous and unlikable man; and Dr. Xavier (Lionel Atwill) runs the entire academy.

Dr. Xavier’s daughter Joanne (Fay Wray) and other workers at the Academy also become tangled up in the case as the plot thickens. All the while, Lee Taylor remains determined to weasel his way into the lives of the suspected and find out the truth about the “Moon Killer.” Will the culprit be found in time, or will the Moon Killer strike again?

Michael Curtiz (1942’s Casablanca, 1945’s Mildred Pierce) directs Doctor X, a 1932 thriller with hints of romance and more than a little bit of comedy at play. The version I’m reviewing is the UCLA Archives technicolor print, which ran on TCM in June.

The most striking thing about this film (and the element that struck me from the very beginning) is the use of sound. Creaks, train whistles and general sounds of the harbor very noticeably exaggerate the environment in the film’s first scenes. Later on, some scenes are completely (or nearly) silent to set the mood. To the seasoned viewer this comes off as a very crafty and deliberate technique, but regardless of how purposeful the use of sound seems, it’s definitely effective.

The sets themselves, though quite stage-ish, also add a lot to the film’s eerie feel. The Academy is a great example of this. It’s almost a character on its own, full of great props that would seem like normal things for doctors to own in a normal scenario, but suddenly become frightening when there’s cannibalism involved. Many of the Academy’s “strange” happenings, as witnessed by the reporter, can be traced back to logical origins, which gives the viewer a laugh. But overall, the building has a ton of personality and definitely works to heighten the film’s mood. The use of color effectively sets the mood as well. Very dark shades are used throughout most of the film, with accents of more vibrant colors (such as green) to bring up the eerie factor.

The plot of the film is immediately set up very well. In the beginning, it seems very much like a simple investigation. The morgue is visited and detectives ask questions, searching for small clues but not really getting themselves into intense pursuits. The viewer knows that this Moon Killer case is a big one, since the reporter is so determined to track down information. Bits and pieces concerning the nature of the crime are revealed slowly, one little morsel at a time, so the scenario builds up (and gets creepier) in the viewer’s mind as the film progresses.

The viewer shouldn’t become suspicious of the doctors simply because they’re strange people, but in combination with this stylized mood-building and the dark environment that surrounds them it becomes an inevitability.

The premise of the film is a bit Clue-ish. One of the doctors must be guilty, but which one could it be? Was it Dr. X in his office with the scalpel, or Dr. Wells in the basement with the scalpel?

Virtually the only character who doesn’t fall under suspicion is the reporter, Lee Taylor. The character is written to be very pushy, which adds some comedic value to the film, especially in his early interactions with Joanne. The two eventually form a little romance which is cute, but odd considering the circumstances under which they’ve gotten to know each other.

The pace of Doctor X is technically quite slow. There aren’t a ton of huge developments. The film packs a hearty dose of creep, but not too much suspense. However, the premise itself is so intriguing and mysterious that the viewer doesn’t need frequent shocks in order to maintain interest.

The good performances across the board are also a draw for the film. Despite the absurdity of the scenario, the performers never allow the viewer to fall into the “these are actors, acting out an improbable situation” mindset. There is no stand-out performance, but all are believable despite the kookiness of the characters themselves.

Doctor X is a slow burner and not quite as scary as one would expect, but it still delivers a thoroughly entertaining mix of thriller, comedy and just a dash of romance. The score: 5/5 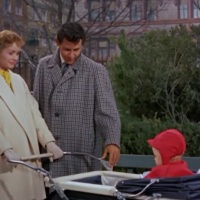