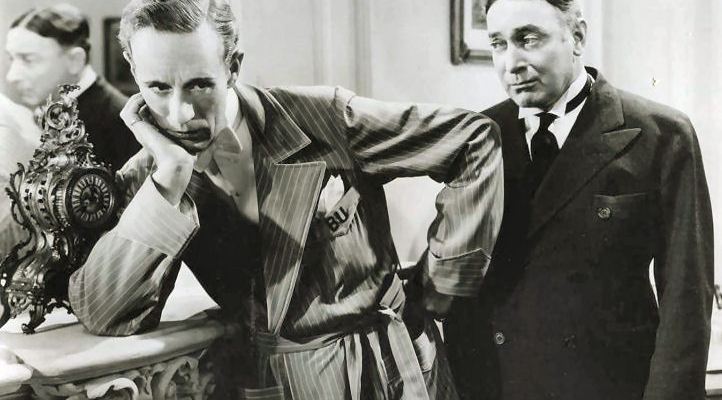 Most of the great character actors of yesteryear have become unfairly forgotten by modern audiences. From eternally tough gangster types to the old woman next door, these actors took roles that were small but often very important to the films.

One such actor was Eric Blore. Born in England in 1887, Blore – like many stars of his time – got his start on the stage, but not before leading an average life for a few years. A college graduate, Blore worked in the insurance business before finding work in touring stage groups.

It wasn’t until working with two of Hollywood’s greatest greats – Fred Astaire and Ginger Rogers – that Blore finally broke out in the film world. He first appeared on screen in 1926, but 1933’s Flying Down to Rio, with his brief performance as a hotel manager, finally brought him some well-deserved attention. He went on to appear in over 80 Hollywood productions, including five of the famed Astaire/Rogers films. His on-screen career spans the mid-20s to mid-1950s.

With his knack for comedy (especially dry comedy) and wealth of stage experience, Blore could have become known for just about any type of character, but in Hollywood he became known as one thing: the very professional but usually disgruntled sidekick (often in the form of a manager or butler/valet).

Alongside Astaire and Rogers, he was a hotel manager (Flying Down to Rio, Shall We Dance), a waiter (The Gay Divorcee), a valet (Top Hat) and Rogers’ boss (Swing Time).

He starred as valet again in The Lone Wolf thriller series, which stars Warren Willliam as a jewel thief-turned-detective; Sullivan’s Travels (1941); Picadilly Jim (1936); Breakfast for Two (1937); and It’s Love I’m After (1937). He appeared as a butler in 1943’s collaborative Forever and a Day and 1936’s The Ex-Mrs. Bradford. And these are just a few of  his trademark roles – the list could probably go on for days!

Eric veered slightly away from his usual roles in films like 1941’s The Shanghai Gesture, in which he portrayed a bookkeeper (though it isn’t a role terribly far from his managerial characters). Another similar-but-different character is Mr. Fox, a man trying to sell a railroad contraption – still a businessman, but not a manager – in 1935’s Diamond Jim.

But sometimes Blore veered away from his well-known “sidekick” persona completely. In 1937’s Quality Street, which stars Katharine Hepburn, Blore portrays an Army sergeant and recruiter. In Preston Struges’ 1935 romantic comedy The Good Fairy, Blore’s character gets to use the prestigous “Dr.” prefix to his name.Though still comedic roles, this military man and doctor were in a different arena than the roles that Blore is most well-known for.

Branching even farther away from his usual roles, Blore sometimes played not the butler or valet, but the man rich enough to employ butlers and valets. Such is the case in 1941’s Road to Zanzibar, in which he portrays a diamond baron. In 1941’s The Lady Eve, Blore’s character is a successful con man, masquerading as a “Sir.” He was also a “Sir” a year earlier, in 1940’s ‘Til We Meet Again.

Clearly, Blore played a wider variety of characters than he is remembered for throughout every decade of his career. Still, my personal favorite role of his is a typical one for him: that of Leslie Howard’s sidekick/valet, Digges, in It’s Love I’m After. The film itself is hilariously written, and some credit must be given to the writers for providing such great scenes between Blore and Howard. Blore is a complete scene-stealer, and his banter with Howard is one of the best parts of an already-great screwball comedy. Who else could have successfully (and so hysterically) pulled off this role, matching the three fantastic leads effortlessly and winning the viewer over?

14 thoughts on “Eric Blore: What a Character!”