Sue Gallagher (Ann Savage) is a reporter on her way home late one night, headed to the New York City apartment in which she dwells above a wax museum.

She happens upon the body of Joe Wells (George E. Stone), a gangster who was shot. Knowing his death will be a great opportunity for an exclusive story, she hides the body in the wax museum – appropriately, a wax museum where all of the figures are gangsters –  and immediately calls her paper, the Chronicle, to let her coworkers in on her discovery.

There had been a $5,000 dead-or-alive reward out for Wells prior to his death, and Sue thinks she can get the scoop on who killed him.

Meanwhile, wax museum owner Henry Miggs (Charles Halton) is surprised when he notices that one of the figures in his museum isn’t made of wax.

A twisty tale of murder, thievery and missing corpses is spun by Midnight Manhunt, a 1945 mystery which appears in Mill Creek’s 50 Mystery Classics set. The film was directed by William C. Thomas and written by David Lang. Appearing alongside Savage, Stone and Halton are William Gargan, Leo Gorcey and George Zucco.

Mill Creek’s print of this film isn’t too bad. There’s a bit of grain to the picture, which is most apparent in the darker shots, and at times it does look a bit washed out. The sound is a larger problem, with lots of crackling and muffling. It isn’t the worst print in one of these sets, but it certainly isn’t the best either.

As for the film’s content, there is a decidedly light mood throughout most of the film. There are only a couple of big scenes of shock, drama or action. The script goes for a few obvious laughs, which don’t always land. Not-totally-successful humor plus a pretty slow pace make the film feel a bit tedious at times.

However, on a bright note, Ann Savage is a lot of fun to watch. Her character is that of a hard-working, spunky, tough reporter who can easily hold her own in the male-dominated world of journalism. Without a doubt, she’s the highlight of the film, though I also enjoyed Charles Halton’s anxious performance as Henry Miggs.

Midnight Manhunt is worth watching for Ann Savage’s performance, but not much more. I had high expectations for this film based on the fun wax-museum-mystery premise but it turned out to be a bit of a dud. The score: 2/5 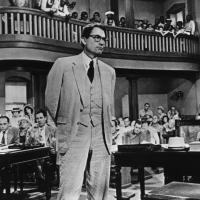