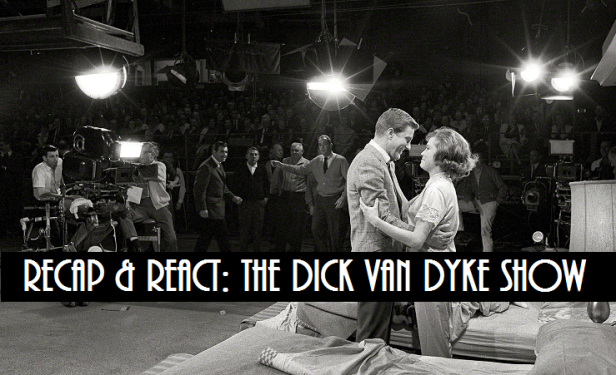 Season 5, Episode 16: “I Do Not Choose to Run”
Directed by Jerry Paris
Written by Dale McRaven and Carl Kleinschmitt
Originally aired January 19, 1966
Recap: After giving a very successful speech on the topic of a proposed shopping center at a New Rochelle city council meeting, Rob is urged to run for a position as councilman.
Reaction: This episode starts out kind of slow, but gets better as it moves along. As soon as the town finds out that Rob is even considering a run for city council, he gets tons of phone calls and unexpected house guests, piling stress on him by sharing their problems with him, though he hasn’t even decided for certain whether he’ll run. At the very end of the episode, Dick Van Dyke breaks the fourth wall and gives the audience a cute little warning that they have to tune in next week to see how it all turns out — a very mid-century way of promoting the next episode!
Favorite quote/moment: Buddy on his jealousy over Rob’s councilman run – “I’m jealous of everybody! I’m still sore at Cary Grant for gettin’ all my girls!”

Season 5, Episode 17: “The Making of a Councilman”
Directed by Jerry Paris
Written by Dale McRaven and Carl Kleinschmitt
Originally aired January 26, 1966
Recap: After finally deciding to make a run for office, Rob’s campaign begins. But it gets off to a bit of a a rocky start when his campaign manager is unable to attend his first public appearance with him.
Reaction: This episode is the better of the two council-focused installments of the show. With all of his internal turmoil over whether to run for office settled, Rob faces the victories and mishaps of working the campaign trail, which is often fun to watch. The episode pokes a bit of fun at the political system, with Rob gaining some favor with the public due to his height and sense of humor. I love the scene where all of his friends gather at his house to keep up with the vote counts with him — it brings together the whole, lovable ensemble cast of the show (minus Jerry Paris, who directed the episode. His character attends the party by phone!).
Favorite quote/moment: Laura pointing out how much more Lincoln knows about city operations than Rob

Season 5, Episode 18: “The Curse of the Petrie People”
Directed by Jerry Paris
Written by Dale McRaven and Carl Kleinschmitt
Originally aired February 2, 1966
Recap: Rob’s parents ask him to throw a dinner party, where his father will reveal a mysterious secret. Inviting Buddy, Sally and Millie to the party, Rob and Laura eagerly await the news of the elder Mr. and Mrs. Petrie. They gift a sentimental heirloom to Laura, but also tell Rob and Laura about a family curse!
Reaction: This is a pretty funny episode  — faster-paced than the councilman episodes, brightening up the season. The supernatural element of the family curse adds an extra bit of fun. Laura is the focus of the episode, facing a new twist on the family curse. Great to see Rob’s parents, too. Tom Tully and Isabel Randolph always make wonderful guest stars, and the outcome of the episode is sweet.
Favorite quote/moment: Laura’s reaction to the brooch + Rob pushing his parents out the door

Season 5, Episode 19: “The Bottom of Mel Cooley’s Heart”
Directed by Jerry Paris
Written by John Whedon
Originally aired February 9, 1966
Recap: Mel gets in trouble with Alan Brady over a sudden script change. Rob convinces Mel to stand up for himself, but his advice backfires!
Reaction: After four and a half seasons of butting heads and cracking jokes, Buddy and Mel finally find a way to get along when the writers and Mel unite against Alan’s outburst. It’s nice to see them all band together, especially since Alan Brady has never exactly been painted as a likable or sensible character. He’s got a very over-the-top, very stressed, and somewhat intimidating personality and it’s nice to see his employees stand up to him! A good episode that emphasizes the camaraderie of Rob and his workmates.
Favorite quote/moment: Even Buddy feels bad for Mel!

Season 5, Episode 20: “Remember the Alimony”
Directed by Jerry Paris
Written by Dale McRaven and Carl Kleinschmitt
Originally aired February 16, 1966
Recap: While Buddy and Sally are over for dinner one night, Ritchie finds a document that Rob and Laura have been hiding — their divorce papers, issued by the Mexican government! The Petries share the story of how they accidentally ended up getting a divorce in Mexico, three months into their marriage, while on a trip across the border.
Reaction: I’m going to have to take a tally of how many flashback episodes appear in each season. With this one being yet another, I’m pretty sure Season 5 will take the title for the highest number! Here we see Rob and Laura’s earliest days of marriage, when they were living in a hot apartment in Texas. With Rob’s friends always stopping by the apartment, Rob and Laura decide to take a vacation to give themselves more alone time. Divorce doesn’t seem like it would be a funny topic, but this episode is quite good, with an extra-cutesy ending. One of my favorites from this set of five.
Favorite quote/moment: “If it was air conditioned, would it be this hot? You silly billies!”