Skip to content
Date: August 19, 2015Author: Lindsey 9 Comments
Mae Doyle (Barbara Stanwyck), after 10 years spent on the East coast, has returned to her Pacific coast hometown following the death of her beau, who was a married man. She’s staying at the old family home with her younger brother, Joe (Keith Andes). Joe’s girlfriend, cannery worker Peggy (Marilyn Monroe), admires the wordly and sophisticated Mae. She confides that she’s not sure if she wants to be married, because she wants an exciting life, rather than a monotonous one lived under the thumb of a bossy husband.

Mae’s intentions are just the opposite. In attempt to escape her past and the guilt she feels over having been involved with a married man, she’s looking to settle down, despite her cynical attitude about love. She begins dating fisherman Jerry D’Amato (Paul Douglas) while forming a more antagonistic relationship with Jerry’s best friend, Earl (Robert Ryan).

Clash by Night was directed by Fritz Lang. The screenplay was written by Alfred Hayes from a play by Clifford Odets.

The premise of Clash by Night seems fairly simple, but the film has a certain intensity. It isn’t completely consistent, but it’s present more than enough to make the film worthy of a watch. These characters are complicated people, and the film doesn’t hesitate to explore their flaws or mistakes.

While the pace and mood are somewhat uneven at times, the script is good, and there are a few great quotes. Some of my favorites (all from Mae, within just the first half-hour of the film):

“What do you want, Joe, my life’s history? Here it is in four words: big ideas, small results.”

“Home is where you come to when you run out of places.”

“Confidence. I want a man to give me confidence. Somebody to fight off the blizzards and the floods. Somebody to beat off the world when it tries to swallow you up! Ha – me and my ideas.”

This film’s greatest appeal for many classic film fans is the opportunity to see Stanwyck share the screen with Marilyn Monroe, and it is very interesting to see them act alongside each other. They’re two such different actresses, but both very talented. I became curious as to how they got along on set and looked into it after watching the film. TCM’s article on the film notes:

“Playing one of her first important roles, Monroe was nervous to the point of vomiting before every scene and breaking out in red blotches on her hands and face. She was often late, forgetful, and uncommunicative. Lang, not one to suffer actor idiosyncrasies lightly, was at his wits’ end with the young actress, but Stanwyck was a model of patience. […] Stanwyck admitted years later that Monroe ‘drove Bob Ryan, Paul Douglas, and myself out of our minds.’ She told the Toronto Telegram in 1965 she found Monroe ‘awkward. She couldn’t get out of her own way. She wasn’t disciplined, and she was often late, but she didn’t do it viciously, and there was a sort of magic about her which we all recognized at once. Her phobias, or whatever they were, came later; she seemed just a carefree kid, and she owned the world.'”

Stanwyck was known for being very cooperative and easy to work with on set. It’s unsurprising to read that, despite the problems that may have gone on during the film’s production, she was patient and respectful toward Monroe.

It’s not unheard of, in a Stanwyck film, for the actress to completely outshine the rest of the cast. It isn’t that she starred alongside a ton of weak performers — the opposite, actually! She was just too good, stealing the viewer’s attention away from her co-stars with a gripping screen presence and consistently-amazing performances.

That isn’t the case here, however. Stanwyck’s performance is fantastic, but many of the film’s performers are strong. I was particularly impressed by Robert Ryan as Earl and Marilyn Monroe, who gives a lively performance in a small-but-not-unimportant role. There seems to be a bit more of a balance here between Stanwyck and the other players, which is nice to watch.

Clash by Night is by no means a perfect film, but it is a tense story that is very much worthy of a watch, especially for fans of either Barbara Stanwyck or Marilyn Monroe.  The score: 4/5 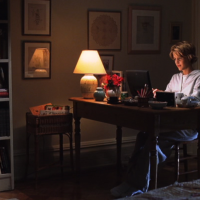