Joan Ellis (Phyllis Thaxter) is a convicted murderer, sent to death row for her crime. Her execution has been scheduled, and in less than an hour she’ll be dead.

Joan’s psychiatrist, Dr. Bergson (Edmund Gwenn), wishes to clarify the facts of the scandalous case. He reflects on her psychological deterioration. She was a normal girl from a normal family, with no history of mental illness in her ancestry.

It all began at Joan’s engagement party, where she and her family were celebrating her impending marriage to Bob Arnold (Henry H. Daniels, Jr.). Joan started to hear a voice in her head, and fainted. Despite her attempts to recover and return to normalcy, this alter ego (“Karen,” brilliantly voiced by Audrey Totter) kept speaking to her, and it carried a sinister message.

Bewitched (1945) was directed by famed radio personality Arch Oboler, the writer/director/narrator of a popular ’40s program called Lights Out. The film is based on a Lights Out episode titled “Alter Ego,” which was also written by Oboler.

Bewitched was produced on a shoestring budget — low even for a B-movie, as TCM’s article about the film notes — but it doesn’t show. Somewhat melodramatic and definitely suspenseful, this is a film of surprisingly high quality, despite what little it took to make.

Near the film’s end some special effects are used, to portray the personalities of “Joan” and “Karen” as separate souls. It’s a simple double-exposure effect, but it’s very nicely-executed and not overused.

Phyllis Thaxter gives a very strong performance as Joan. A few of Thaxter’s scenes are truly heartbreaking; once, in her jail cell, she says that she wants to die because “Karen” will die with her. She sees death as the only way to overcome her psychological struggle. The viewer is left with a sense of how difficult life is for those inflicted by mental illness.

Thaxter also does a great job of differentiating Joan’s real personality from how Joan acts when “Karen” takes over. Audrey Totter voices “Karen” when she’s occupying Joan’s brain, but the character manifests physically, as well — in the special-effects scene discussed above and when the “Karen” personality takes control of Joan’s body. Totter’s voice performance is effective, but Thaxter must also be given credit for the character’s menace.

The film is generally well-paced, spending much of its run-time on flashbacks to Joan’s life just after she began hearing the voice of “Karen.” Attention is also paid to Joan’s court case, and her psychiatrist’s effort to save her from execution in the final hours. The court scenes don’t drag; the script is well-structured to balance the slightly-slower scenes with the more suspenseful.

I expected Bewitched to be a silly, spooky film. Instead, it is a genuinely good psychological picture, with a solid lead performance and an intriguing story to tell. Well-adapted from radio to screen, Bewitched is well worth a watch if you’re in the mood for a stylish, noir-edged cognitive thriller. The score: 4/5 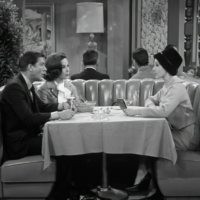 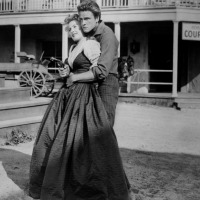