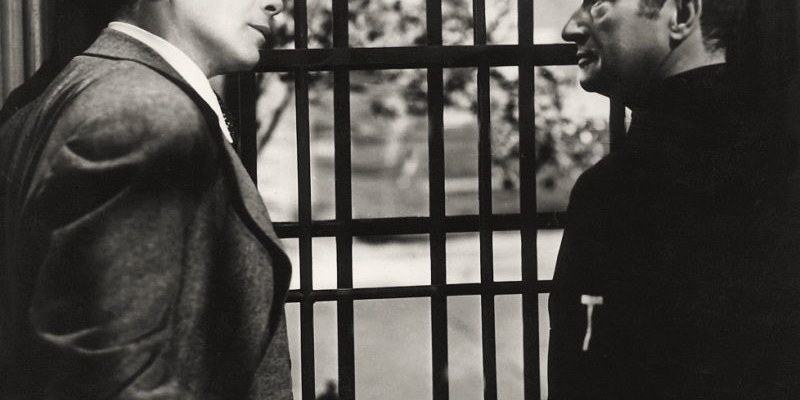 Eddie Kagle (Paul Muni) is a gangster who hasn’t done a great job of evading the law. He’s just been released from prison, in fact.

In other words, as the film’s opening sequence puts it: “This story is about Eddie Kagle who based his way of living on what Omar Khayyam once said: ‘Live fully while you may and reckon not the cost.'”

Soon after his release, he’s killed by one of the only people he thought he could trust — his friend and fellow criminal, Smiley Williams (Hardie Albright).

When Eddie wakes in the afterlife, he finds himself in Hell. His first instinct is to break out of the place, but the Devil (Claude Rains) has other ideas. Noticing Eddie’s resemblance to a morally-sound judge named Frederick Parker, the Devil decides to send Eddie’s spirit back to earth in the judge’s body.

Angel on My Shoulder, also known as Me and Satan, was directed by Archie Mayo. The screenplay was written by Roland Kibbee along with Harry Segall, who is also credited with the original story.

I’m a huge fan of Claude Rains. To me, he’s sort of a male version of Barbara Stanwyck in that he has excelled in every film I’ve seen him perform in, and I believe there would be very little he’d be incapable of playing. That being said, if there was one role I’d never have pegged him for, it would be that of the Devil. He takes on that challenge here and succeeds, with the help of a witty and fantasy-laced script. He’s a bit under-utilized, with the focus put on Muni, but both of their performances are very good.

Though the film eventually becomes a pleasant fantasy-comedy, it starts out pretty dark (visually and in mood). Eddie is killed, and the version of Hell that he wakes up in is pretty chilling. He’s confronted by a man who was hung for killing his wife, at which point he realizes exactly where he is, and that he is no longer alive.

Things get much lighter when Eddie and the Devil move back above-ground. They both have their own motives, and Eddie encounters difficulties adjusting to his new life — which is lived in place of another man, with no real knowledge of what his mannerisms should be, or what his day-to-day schedule should entail. On top of the confusion of taking over someone’s life, there’s the small fact that the “judge” is being followed around by “Nick,” the Devil that no one else can see or hear.

The mood may become lighter as the Devil brings his new friend Eddie back to Earth to do his dirty work, especially when a romance (featuring the lovely Ann Baxter) comes into play, but there is still plenty of drama and intrigue to keep things interesting. As it turns out, the judge (whose body is now inhabited by criminal Eddie) may have been a stand-up guy, but his convictions have given him enemies of his own.

Angel on My Shoulder doesn’t move at a break-neck pace, but it’s a nice watch with a strong cast. Worth a watch for fans of fantasy-comedy. The score: 3.5/5

Angel on My Shoulder is available for free download on the Internet Archive. Unfortunately, the print is in pretty bad shape. It’s watchable, but barely in some spots. Still, the film is worth a look, so if you’re interested, you can find it here — stream or download. 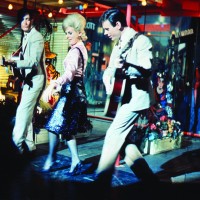