For most of us involved in the online classic film community, being a classic film fan (or “old movie weirdo”) involves more than just watching a pre-code or film noir now and then. We watch countless films, engage with our fellow movie buffs on social media, rant and rave on our blogs… and read books about our favorite subject, film! Today on TMP, a look at the entertainment-related books I read in 2015… and  “to be read” list of those I hope to get to in 2016!

Read in 2015
(All lists are chronological by date finished)

Nineteen books total, out of 81 total read in 2015, so about 23% of the books I read throughout the year were film/TV-focused or were used as source material for a film. My favorite reads of the year were The Ice Cream Blonde, “I’d Love to Kiss You…”, Leave Her to Heaven, and Mildred Pierce. Reviewed titles are linked!

You may recognize a few of these titles from my 2014 TBR — I somehow never got around to reading them! Others are new additions to the list. (Listed alphabetically by title.)

If you read any great film-related books last year feel free to leave suggestions in the comments — I definitely intend on reading more than 11 books this year, so help me grow my TBR! 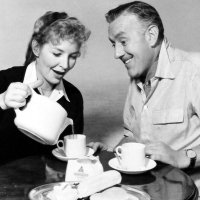