Henry (Edmund Gwen) is a man in trouble. While working as a bookkeeper, he was found to be embezzling money, so he’s trying to stay one step ahead of the police and avoid capture. His daughter, Sylvia (Katharine Hepburn), decides to go on the run with him, disguising herself as his son “Sylvester.”

Henry and “Sylvester” met Jimmy Monkley (Cary Grant) on a ferry, and plenty of complications ensue as they all become entangled in con schemes.

Sylvia Scarlett was directed by George Cukor, one of my favorite directors.

I’m a big fan of Cary Grant and a big fan of Katharine Hepburn, so I have a little soft spot for this film, the first of four they made together. To add to that, it’s helmed by the wonderful Mr. Cukor. Objectively, it isn’t a great film… but there are some interesting aspects to it, and no chance to see Grant and Hepburn sharing the screen should be turned down.

Much has been written about the film’s portrayal of gender and sexuality. After all, it is a film about a woman (Hepburn) posing as a man, with romantic complications to follow. It’s a very tame film, and noncommittal, in a way. It doesn’t take a clear angle on these topics, instead using them as vehicles for storytelling with kooky humor.

This is somewhat of a frenzied film, with a lot of energy at times (though it isn’t consistent throughout). It’s particularly energetic in scenes that are meant to bring big laughs, and in many cases succeed. There would be more laughs if the script had taken greater risks, but as it stands the film is still enjoyable and brings several chuckles.

Both Cary and Katharine give good performances, though I’ll watch either of them in anything, so my opinion may need to be taken with a grain of salt! Hepburn successfully walks the line between Sylvester and Sylvia, believable as Sylvester but also in her more “girlish” (flirty, sweet) scenes, donning dresses and speaking in a higher pitch.

So, Sylvia Scarlett — not a great film, not a particularly groundbreaking one, but an enjoyable watch for fans of Grant and Hepburn. 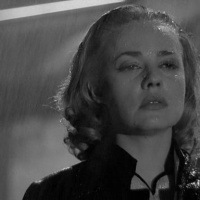