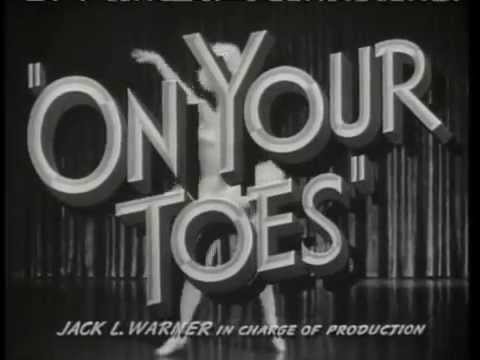 After spending over fifteen years performing in a vaudeville act called “The Dancing Dolans” with his parents, Junior (Eddie Albert) has decided to strike out on his own and become a composer. He soon meets Ivan Boultonoff (Leonid Kinsky), a composer who takes an immediate liking to him and offers to work with him.

Ivan has been composing ballets for Sergei Alexandrovitch (Alan Hale) and his Russian troupe. After writing a ballet called “Slaughter on Tenth Avenue” with Junior, Ivan hopes Alexandrovitch will produce it.

Unfortunately, Alexandrovitch takes an immediate dislike to Junior, partially because he isn’t Russian like the rest of the troupe/crew. But with Ivan and Alexandrovitch’s prima ballerina Vera (Zorina) on his side, can Junior manage to get the ballet produced after all?

On Your Toes was directed by Ray Enright. The film is based on a hit Broadway musical, but according to Leonard Maltin’s review bears little resemblance to its source material.

Eddie Albert is one of my long-time old Hollywood crushes, so I’ll readily admit that I’m completely biased, but I liked him a lot in this role. At times, he gives Junior a naive optimism that is very believable — especially during his early scenes of “freedom” from the vaudeville act, when he meets Ivan. His chemistry with Zorina is incredibly sweet. This was only Eddie’s second big-screen role and while it isn’t exactly a star-maker, his performance is solid.

The film actually opens in 1920, when Junior is a child and still performing in his parents’ dancing act. The boy has struck up a sweet childhood romance with a fellow dancer from another act, but their families will no longer be performing in the same show, so they’re torn about. As it turns out… she’s Vera! When the two meet again nearly twenty years down the road, they quickly realize that they already know each other.

“Zorina,” as she’s billed here, is Vera Zorina, a star of the stage before she made her way to Hollywood. The film gives her a great opportunity to showcase her skills as a dancer. She played the same role on the London stage, and though as mentioned above the film is apparently quite different from the play, the experience seems to have been a benefit to her; she fills Vera Barnova’s dancin’ shoes with ease!

Between Junior and Vera’s history, their chemistry, and the charm of the actors playing them, they very easily win the audience over. The film is part romance, part behind-the-stage tale, and the viewer becomes quite invested in the outcome of the romance.

Despite the sweetness of the romance and the talent of its two central players, the film does have its faults. The pace is moderate but feels downright sluggish thanks to the low stakes/lack of real conflict. The romance is cute, but the behind-the-scenes issues between Junior and the troupe could have been executed with so much more drama and excitement.

I will say, however, that the “jazz ballet” sequence ending the film is wonderfully staged, another aspect of the film that makes it worth tuning in for.