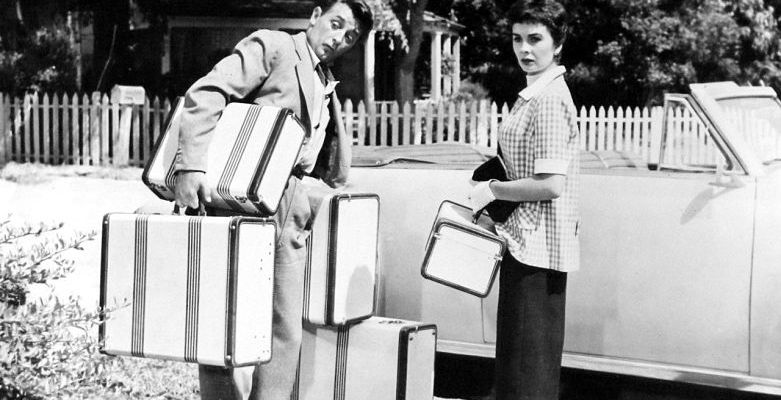 Corby Lane (Jean Simmons) has returned from England and is headed straight for an unexpected location: a tiny town in Arkansas! She intends to visit Dr. Robert Sellers but instead finds his son, Doc (Robert Mitchum). She tells him that she’s on her way to California, and asks what he would do if she gave him $5,000.

Doc, confused by the question, says he’d lock her up for giving up a large sum of money for no apparent reason. So, rather than give him the money, Corby backpedals and says she’d like to stay in town for a few days.

Soon after, odd gifts begin turning up at the homes of several townspeople — a diaper and furniture shipment that could outfit the children and homes of an entire Army, for the Jordans, who recently had their first child; a case of Scotch for the friendly town drunk. It quickly becomes clear that Corby is the one sending these gifts, but why? And will they have a lasting impact on the town?

Lloyd Bacon directs 1954’s She Couldn’t Say No, his final film as director.

She Couldn’t Say No marks a (much, much lighter) re-teaming of the stars of the 1952 film Angel Face, Jean Simmons and Robert Mitchum. Angel Face has planted itself among my favorite films noir, thanks in large part to its crazy/crazy-good script, but also to the credit of Simmons and Mitchum.

They’re wonderful to watch together in both films. Here, their characters get to have a bit more fun, their relationship a blend of sweetness and snarky banter. Their chemistry is quite playful throughout the film, which is delightful to watch. Mitchum’s character is embedded with a great sense of humor which is very sarcastic, but not at all in a mean way.

On the whole, She Couldn’t Say No is a very sweet film, offering a feel-good story about a woman doing good deeds. Mitchum’s character calls it “misplaced generosity,” and granted, her ideas don’t always work out as planned… but the viewer’s heart is warmed by her wish to improve the lives of others.

Her gift-giving brings some complicated, unexpected consequences to the town, but nothing too dramatic. The mood throughout the majority of the film is bright and lightly humorous. The theme of “money can’t buy happiness” is explored. Given the funds, many people choose to leave tiny, sleepy Progress, Arkansas, but will they truly find contentment elsewhere?

The town and its people are very lovable, adding to the film’s wholesome, sweet charm. It’s a town where everyone knows everyone, the doctor carries out all of his business through house calls, and no one locks their doors.

There’s a bit of a mysterious element to the story, too, as the viewer is at first unaware of the backstory of Simmons’ character, including where she got so much money and why she wants to give it away. This mystery and the town’s new troubles resolved, the film wraps up with a super cute, super syrupy ending.

A couple of months ago I reviewed 1948’s A Date with Judy and called the film “charmingly quaint.” That same description can be applied to She Couldn’t Say No. It’s just a lovable, adorable bit of easy viewing.