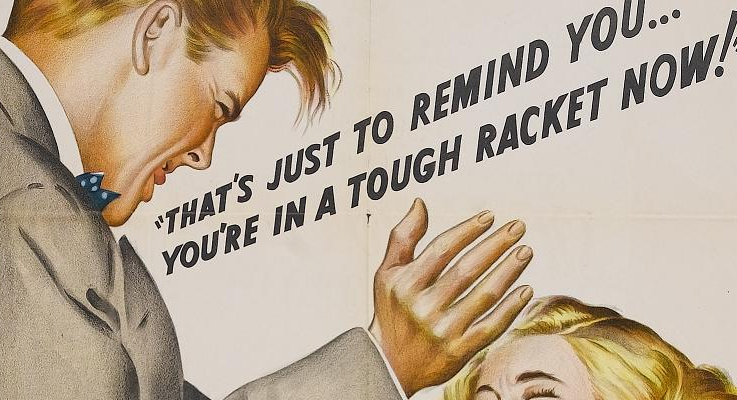 Jane (Lizabeth Scott) and Alan Palmer (Arthur Kennedy) are traveling on a dark and nearly deserted highway when a stranger in a speeding car suddenly throws a bag containing $60,000 cash, obviously meant for someone else, into the back seat of their car.

Alan wants to turn the bag in to the police, but Jane isn’t quite on board with that plan.

A man named Danny (Dan Duryea), who claims to be the rightful owner of the money, soon tracks the Palmers down. But still, Jane doesn’t want to give up the loot. She’s willing to do whatever it takes to keep the cash for herself, whether that means lying to to Alan’s suspicious sister Kathy (Kristine Miller) or committing murder.

Too Late for Tears is an interesting film in that it isn’t a hardened criminal but rather a suburban housewife who falls under the spell of greed and is overtaken by it. And Lizabeth Scott is absolutely perfect for this role. The character is sneaky and manipulative – two traits that Scott is able to pull of remarkably well. She absolutely makes this film.

Lizabeth’s talents aren’t the only great thing about this film, though. Wise cracks, particularly between Danny and Jane, add a sort of dark humor and charm to the film. The intriguing premise is carried out at a steady pace with a number of fantastic twists and turns.
The score: 4/5

What’s in the box? – My library carries only the 2003 DS Productions release of this film. It has one disc, which features the film and a few special features, plus a one-sided insert detailing the film and its original release.

Packaging: 3/5 – The packaging for this is average. It’s a simple DVD case with a very nicely done front cover and a quite detailed back cover.

DVD Quality: 2/5 – The picture quality leaves a lot to be desired. It’s sometimes so dark that you can’t see a thing! I’m all for a little bit of film grain, but the lack of picture quality on this disc takes a lot away from the film. It’s hard to fully appreciate the cinematography when you can barely see anything. Some of the dialogue also cuts out, though this is more of a minor problem since it only happens a few times and usually only cuts off the last word or two of the sentence.

Special Features: 4/5 Special features include stills, lobby cards, cast and crew bios, noir filmographies and video profiles of Lizabeth Scott and Dan Duryea. I would have liked to see more commentary included (simply because I love watching commentary featurettes, especially from those who worked on a film), but overall the features are nice.

Overall DVD quality score: 3/5 – As much as I enjoyed the film and all of its twists and turns, I won’t be adding this to my collection because the picture quality is, unfortunately, so low.