Lorna Webster (Nancy Kelly) is on a bus headed to her hometown of Eben Rock, Massachusetts when a strange woman (Elspeth Dudgeon) gets on the bus and sits down next to her. The woman seems to know a lot about Lorna: her name, her family history. She knows that Laura is a descendant of Elijah Webster, a judge who caused the deaths of fifteen women. He convicted the women of witchcraft, and they were burnt at the stake.

Soon after Lorna meets the woman, the bus crashes, and most of the passengers are killed. However, only twelve of the thirteen victims’ bodies are recovered. The body of the old woman who sat by Lorna is missing.

Returning to Eben Rock, Lorna is incredibly upset by the accident, and her disturbance gets even worse when strange things begin happening to her. The townspeople of Eben Rock begin to believe that Lorna is possessed, and even she herself suspects that some supernatural force may be taking over her life.

Walter Colmes (The French Key, Identity Unknown) directs 1945’s Woman Who Came Back. The screenplay was written by Dennis J. Cooper (When Strangers Marry) and Lee Willis (his only writing credit).

Woman Who Came Back is a bit of an odd film in that its tone is very inconsistent. At times it is quite light. There’s a bit of comedy early on (a good portion of which comes from Lorna’s maid, who is feeling 10,000% done with her job). There’s also some unintentional humor (“LORNA WEBSTER. YOU KILLED MY GOLDFISH.”) and a cheesed-up ending.

But at other times, the film takes itself more seriously. It does have an intriguing plot. Witchcraft always makes for an interesting subject in mystery films. I don’t feel that Woman Who Came Back delves quite as deeply into its plot as it should. There aren’t any unpredictable twists. But given the time constraints (a run time of only 68 minutes), it’s a decent story.

My favorite aspect of the film would have to be Nancy Kelly’s lead performance as Lorna. She isn’t anywhere near as over-the-top as I expected her to be based on the film’s premise, and as a result she helps ground the film in reality despite its supernatural plot.

Woman Who Came Back is nothing too great. It may be worth a watch for those interested in psychological thrillers or supernatural mysteries, but even then, the viewer shouldn’t go in with too high of hopes. It makes a decent diversion for a dull evening, but I can’t recommend it highly. The score: 2/5 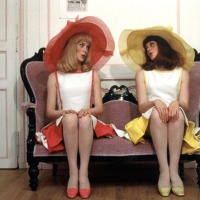