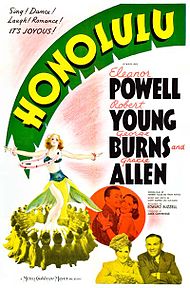 Brooks Mason (Robert Young) is one of Hollywood’s most popular film stars. He’s got the type of fame that makes it impossible for him to leave his home without being mobbed by fans.

George Smith (also played by Robert Young) is the owner of a Hawaiian pineapple plantation, who has come to California in hopes of finding an air of sophistication, to impress his well-traveled girlfriend, Cecelia (Rita Johnson).

What George doesn’t expect to find in California is crowds of fans waiting for him, but that’s just what he gets — they’ve mistaken him for Brooks Mason!

Brooks and George meet and are shocked to discover that they could pass for twins! Even the staff of Brooks’ mansion can’t tell them apart.

Desperate for a break from his hectic life, Brooks comes up with a plan. He’ll head off to Hawaii for some rest and relaxation, while George heads to New York in his place for a press tour.

Off George goes to the Big Apple, accompanied by Brooks’ manager Joe Duffy (George Burns). Meanwhile, Brooks boards a boat to the islands, where he meets the lovely Dorothy March (Eleanor Powell) and her friend Millie de Grasse (Gracie Allen).

Honolulu provides and interesting (and still very relevant) look at fame and celebrity culture in its opening. George – not even a star, but a star’s lookalike – is mobbed. Fanatics are and always have been lacking boundaries!

Robert Young was a great choice for the dual role of Brooks Mason and George Smith. Really, all of the casting is nicely done. Powell is a delight. Burns and Allen are a bundle of fun, as usual (though they don’t steal the show as they did in films like We’re Not Dressing — probably because they’re kept apart for the majority of the film).

The best scenes are those that involve Robert Young playing against himself. He fills both characters well. They’re believable as two different people, and fun to watch together.

Runner-up for most fun scene behind these is Eleanor Powell’s big jump-roping tap number. I’m mildly envious of her jump rope skills (and she does it with such musical rhythm!).

I hoped to love this film, and it is enjoyably light entertainment for the most part, but I do have one major bone to pick with it: Eleanor Powell does a tap dance number in blackface. The scene seems to drag on forever and it brought down my enjoyment of the film, which up until that point had been a pleasant watch.

Honolulu doesn’t bring huge laughs, and as stated above it’s a bit problematic, but the music is lovely for the most part, and the acting is good. Worth a watch for Robert Young’s dual performance, though I won’t be adding it to my re-watch rotation.