NOTE: This post is a part of TMP’s Barbara Stanwyck Filmography project. I’m on a mission to view (or re-watch) and review all of Barbara Stanwyck’s films! For more posts in this series, visit the Listography page.

The favorite film:
Double Indemnity, a 1944 noir directed by Billy Wilder, who also co-wrote the screenplay with Raymond Chandler

The synopsis:
Walter Neff is a straight-laced and successful insurance salesman. During a house call to remind a client that his car insurance policy is up for renewal, Walter meets Phyllis Dietrichson, his client’s wife. Phyllis is uninterested in car insurance, though. She wants to know how to take out an accident policy, insuring her husband’s life without him knowing about it. 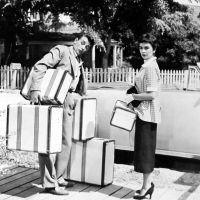