Bob Brown (Warren William) is working as an x-ray tech and only needs one more year of medical school to become certified as a doctor. But med school costs money, and that’s where Bob has trouble. He’s a gambler and swiftly loses his tuition funds.

Caroline Grant (Jean Muir), a nurse working in the same office where Bob does x-rays, is in love with him. She believes in him, so she’s willing to loan him the money he needs to get that year of med school done. He gladly accepts the loan… but then loses all of the money in a card game.

Not wanting to disappoint Caroline, there’s only one thing left to do: lie to her. Bob buys a medical diploma from another doctor who isn’t practicing, and starts a practice in New York under a false name.

To keep the practice at least somewhat on the up-and-up, he hires a qualified doctor to do the serious work, while he promotes the practice and earns a client roster full of socialites and celebrities. Will he be able to keep up with his own lies, or will Caroline and those high-class clients find him out?

Warren William’s characters could be pretty smarmy and despicable, but this one just might take the cake for “Worst Man Ever Portrayed by Warren William.” He takes advantage of a morphine-addicted doctor in order to get that phony diploma. He starts a practice and treats patients without having finished his medical degree, knowing full well that he’s incapable of treating them. He lies to the woman who loves him — the woman who was willing to bet all of her money on him.

Of course, the fact that Bob is so despicable is only a testament to Warren William’s talent. No one played this character type as well as him, and his performance here is wholly believable.

His character seems even worse in contrast to Jean Muir’s Caroline. She seems so genuinely caring and sweet. Muir’s performance is nice, especially in her portrayal of Caroline’s growing suspicions toward Bob, but the character herself leaves a lot to be desired. The ending is completely cornbally and it makes no sense that Caroline seems even more angry about Bob’s close relationship with his patient, the opera singer Maritza, than she is about the fact that he’s running a phony practice.

Despite the issues with the character of Caroline, this quick little film does offer an interesting story. It’s very cynical, but not always handled in a dark fashion. Allen Jenkins’ light-hearted presence makes the whole arrangement seem like a brilliant racket rather than a serious crime that is putting people’s lives in danger. In other moments, like the scene with the sick child, the audience is faced with the grim reality that Bob is completely incapable of meeting the needs of those who visit his office. This rollercoaster of horrifying hills and more humorous valleys lends and odd tone to the film.

Bedside is far from perfect, despite its good performances and interesting premise. Still, I would recommend it for fans of Warren William in particular. The score: 2.5/5 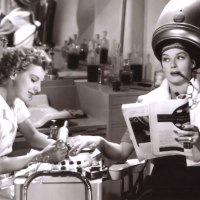