After a three-month stay, Nick Blake (John Garfield) has finally been released from the Army hospital on Governor’s Island, where he could see his hometown of NYC through the window but couldn’t quite make it there. Now that he’s out, he’s excited to be reunited with his beloved city and with his girlfriend, Toni Blackburn (Faye Emerson).

Nick gave Toni some money to hold on to while he was away in the Army, and with it she opened a nightclub. But now she’s gone bankrupt, and has been forced to sell the place.

Nick soon realizes that Toni has not only wasted his money but has also been unfaithful to him, striking up a relationship with club owner Chet King (Robert Shayne), who has given her a job as a performer.

Nick swiftly get his “investment” money back from King (using his fists), leaves his love behind, and heads to Los Angeles with his friend Al Doyle (George Tobias). His plan is to lead a life of relaxation, lounging on the beach… but soon he gets caught up in the con-man lifestyle he led before joining the Army.

The ominously-titled Nobody Lives Forever was directed by Jean Negulesco. Along with the above-credited cast, Geraldine Fitzgerald stars as widow Gladys Halvorsen (the victim of Nick’s latest con), and Walter Brennan as Pop Gruber, an old friend of Nick. The film was written by W. R. Burnett.

The premise of Nobody Lives Forever isn’t terribly unique. A former con man gets back into the seedy business and intends to fleece a pretty lady, only to genuinely fall in love with her. That familiarity doesn’t hurt the film too much, though. The efforts of cast, director, and cinematographer keep the film consistently engrossing.

John Garfield is perfectly cast in the role of a skilled criminal who takes a turn for the gold-hearted. There’s no telling what he was like before the war, but his time in the Army and his time with Gladys transform him into a happier, gentler man. Garfield and Geraldine Fitzgerald are nice to watch together, sharing one particularly lovely scene outside of the Mission San Luis Obispo de Tolosa. I often find Fitzgerald to be an underrated actress and have previously loved her performances in The Gay Sisters and Dark Victory, especially.

Everything about the film is a little bit more low-key than your usual noir/crime drama. The photography makes some nice use of shadow, but isn’t as high on contrast as other films in the genre. There’s some suspense, but with a genuinely sweet romance built into the plot, this isn’t always an edge-of-your-seat drama. None of this works against the film, though. In fact, I’d say it lends a greater sense of authenticity to the film. Nick isn’t a hardened, evil criminal. By the time he falls for Gladys, he wants nothing more than to stop his “work,” and was reluctant to join this con in the first place. An ultra-tense atmosphere would have distracted from the heart of Garfield’s character and made him seem like more of a “bad guy.” Instead, more time is spent building the bond between Gladys and Nick — lighter scenes, somewhat sappier, but very important to the story.

Speaking of which, even the script elevates itself from its own premise, adding in extra layers of interest with *MILD SPOILERS* the arrival of Toni in California, and Nicks turn from swindling Gladys to wanting to start a brand new life with her, and protecting her from his own pals and associates. *END SPOILERS*

I enjoyed Nobody Lives Forever quite a lot. In premise it’s familiar, but its handling of that premise is, in my book, better than average. The score: 4/5 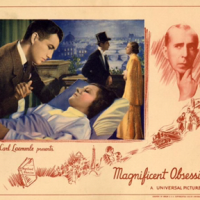 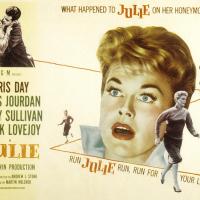