A German U-Boat has been sunk in the midst of World War I. The only survivors are Von Boulten (Frederick Vogeding), commander of the U-Boat, and his lieutenant.

Twelve years later, Von Boulten is living under the assumed name of Karl Schlemmer. In San Francisco he meets Steve McCreary (Ralph Bellamy), a deep-sea diver. The two become mixed up in a scheme to dig up $3,000,000 in gold, along with Lily (Esther Howard), who will fund the expedition and split the profits with the two men.

When that expedition ends in tragedy, Schlemmer and McCreary are still on the hunt for the gold three years later. They may find a way to get to it when wealthy aspiring oceanographer Diana Templeton (Fay Wray) allows them to sign on for her latest scientific expedition.

Below the Sea kicks off in a very dramatic fashion with that U-Boat sinking, setting up an effective hook for the viewer before jumping forward twelve years. The opening is in German with no subtitles (at least, no subtitles on the version TCM aired in August) but there’s plenty of high drama that requires no translation to grab the viewer’s attention. There’s no mistaking the severity of a situation when a man gets pushed off a cliff!

The connection between the opening and the time-jump is made clear very quickly, avoiding any potential confusion, but the mood of the opening unfortunately isn’t kept up throughout the rest of the film. Thankfully, things become less dull when Fay Wray enters the picture, but there were a good few minutes where I considered turning the film off and watching something else.

As much as Wray does to bring a jolt of liveliness to the film, there’s still room for improvement as Schlemmer and McCreary join her expedition. The story takes place on a ship and underwater, but doesn’t take advantage of these settings to create any sense of claustrophobia or build a stronger mood. The film could have been made much more tense by capitalizing on the confinement of these spaces throughout. There are only two scenes were we really get a sense of that: a solo dive attempted by Diana, and the climactic scene with Diana and another character trapped in a diving chamber.

One perk to the use of this at-sea/under-sea environment is the simple fact that we, as viewers in the 21st century, get to see those neat exploration tools of yesteryear. They look so futuristic, in a way, though they’re quite “low-tech” in comparison to today’s ocean exploration gadgets.

Getting back to what I didn’t like about Below the Sea, I can’t discuss this film without ragging on Ralph Bellamy a bit — or at least ragging on his character. He’s so, so unlikable here. There’s that old joke about Ralph Bellamy never getting the girl and heck, I don’t think I’d want him to after watching this film, in which he gets the girl but only after almost killing her! McCreary shows his heart by the end of the film, sacrificing his own safety and possibly his life to save two others, but throughout most of the film he just comes across as very gruff and unsociable. Even after he emerges from the water, having saved the day, he reverts right back to his usual rough exterior, insulting Diana before planting a smooch on her. Screwball banter only works when the fella is kind of rude, but mostly charming; McCreary is mostly rude, and not very charming at all.

The film’s strongest segment deals with the discovery of a giant octopus and it is so much more exciting than the rest of the film, though it’s only a few minutes long. I found myself wishing the whole film had focused on Diana’s knack for science and her under-sea explorations, rather than spending so much time on the hunt for gold. The under-water environment is an endlessly fascinating world, co-existing with – but so much different from – our world on land. It could have been a goldmine for a fascinating and thrilling adventure story, with some tweaks to the script and an earlier introduction of Wray’s character.

I see so much potential in the character of Diana that it’s difficult not to write Below the Sea off as a flick that totally misses the mark, but that would be unfair. There are a few redeeming qualities, including that great climax, Wray’s performance, and the high-tension opening. Still, to call this a good film would be a definite stretch. I’d say it’s worth tuning in for if you’re a Fay Wray fan, but if you’re hoping for a captivating under-the-sea adventure, look elsewhere. 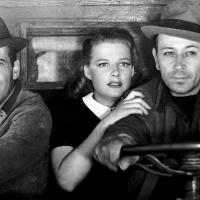