Welcome to this week’s edition of FilmStruck Friday! Every Friday here on TMP, with the exception of the first Friday of the month (which is reserved for “Favorite things about…”), we’ll be taking a look at a film available through the TCM and Criterion Collection-curated streaming service. Today’s film comes from 1936 – Men Are Not Gods, starring Miriam Hopkins. Happy viewing!

Ann Williams (Miriam Hopkins) is secretary to opinionated London theater critic Mr. Skeates (A. E. Matthews). When Skeates dictates a very harsh review of Edmund Davey’s (Sebastian Shaw) performance in the latest production of Othello, Ann carries on with her job as usual, preparing the review for print.

Just as Ann is about to deliver the finalized review, she gets a visit from Barbara Halson (Gertrude Lawrence), Edmund Davey’s leading lady… and real-life wife. Barbara begs Ann to do something — anything, to stop Skeates from printing a negative review and ruining Edmund’s career. Edmund was just having an off night, she says, and will redeem himself with his next performance.

Remembering that Skeates mentioned he doesn’t read his own column or the newspaper in general, Ann takes a risk and decides to rewrite the review. Will this decision cause her to lose her job, or will she successfully save Edmund’s career and avoid her own consequences, too?

Men Are Not Gods was directed and written by Walter Reisch.

As the title itself says, “Men are not Gods,” and this film plays up that idea by focusing on two women. Miriam Hopkins works for a very influential theater critic, and Gertrude Lawrence is a star of the stage. Somewhat unsurprising since Lawrence was a stage actress in the real world, both women are well-suited to their roles. The characters aren’t exactly challenging or complicated, but Hopkins and Lawrence own the film.

Hopkins is energetic and has quite a few funny scenes, to which she brings a bubbly charm. After carrying out Barbara’s wishes of altering the review, she grows genuinely infatuated with Edmund, visiting the theater to see him perform. The attraction between Ann and Edmund brings a few more serious moments in the film’s second half as a love triangle begins to form.

Hopkins and Lawrence share several interesting scenes. My favorite occurs when Barbara discovers that her husband is in love with another woman. She seems to know who, but there’s no animosity between Ann and Barbara in the scene — just sadness.

Sebastian Shaw as Edmund has some great dialogue to work with. A few favorite bits: “In private life, the parts are reversed. Desdemona is the jealous one”; “Whether a woman’s dangerous or not depends entirely on the man”; and finally, describing his attraction to Ann, he proclaims, “Yes, I was thirsty, but not for tea!”

Beyond Edmunds’ memorable lines, the script is quite good. There’s also some very nice cinematography which isn’t show-stopping throughout the film but offers several great shots.

Another reason to tune in: Rex Harrison has a fun, fast-talking role that came before his Hollywood breakout. He’s a small-time reporter at the paper Ann works for, and he holds a candle for her.

I didn’t find Men Are Not Gods wholly gripping, and as such won’t be adding it to my own favorites list, but it’s definitely worth a watch. A generally well-written and well-crafted film, with nice performances by Hopkins and Lawrence. 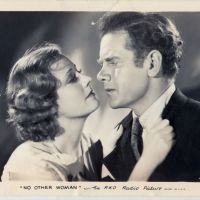