Valentine’s Day is not usually a day I care much about, as a perpetually single gal. But despite my life’s own lack of romance, I have a soft spot for romantic films. Tuesdays are usually a quiet day on TMP, but to bring some sweetness into the world for a moment, the blog is dedicating itself to on-screen sweethearts.

Adding to my family’s growing reputation for loving bad movies, my mom has offered to share her ranking of Nicholas Sparks films. (Previously, I’ve shared my own ranking and my dad’s.) Then, I’ll be sharing a little list of some of my favorite movie romances of the “hate-turned-love” trope.

Of all of the Sparks-watching folks in my family, my mom is probably the least enthusiastic about these corny romances. But still she’s seen them all, usually for one reason: the scenery. Many of Sparks’ books and their adaptations take place in small, beachy towns, and the films are filled with sand and sea imagery. So, with location being her most significant criteria, here’s mom’s ranking!

Safe Haven (2013)
Mom’s ranking: 1
My ranking: 4
Mom’s favorite Sparks setting is the small coastal town and secluded house from Safe Haven. She also enjoys the suspenseful story, which (though it makes her cover her eyes for a few scenes) is somewhat different from the rest of the Sparks-based filmography.

Nights in Rodanthe (2008)
Mom’s ranking: 2
My ranking: 11
Our opinions really diverge on this one! In addition to its beachy setting, Nights in Rodanthe wins mom over with its very blue color palette, and due to my sister’s fantastic impression of Diane Lane’s weird finger-snapping dance. Mom’s been insisting for years that we’re going to take a vacation to the house from this flick (which you can actually rent, in North Carolina).

Message in a Bottle (1999)
Mom’s ranking: 3
My ranking: 2
Can’t disagree with mom about the house in this one — who doesn’t want a gorgeous painting room that looks out on the water? We’re also both envious of Robin Wright’s wind-resistant curly hair.

The Choice (2016)
Mom’s ranking: 4
My ranking: 5
Mom wasn’t crazy about the ending of this one, which she feels could offend people who’ve had to make a similar choice with a different outcome. But she loves the gazebo, the water, and the wind chimes enough to make up for it, landing the flick at number four in her ranking.

A Walk to Remember (2002)
Mom’s ranking: 5
My ranking: 3
Mom jokingly refers to this one as “The Walk I Don’t Remember” because she has little recollection of the plot details or characters. But she does remember watching it a lot with my sister and I in our tween years, so the nostalgia factor puts it at number five on the list.

The Last Song (2010)
Mom’s ranking: 6
My ranking: 10
Not just a beach, but a turtle-saving beach. Bonus points! Mom doesn’t care for Will’s super ritzy plantation house (or the people in it), but Tybee Island is lovely.

The Notebook (2004)
Mom’s ranking: 7
My ranking: 1
There’s a canoe, but not enough beach, haha. Mom says that when hears of The Notebook she thinks not of the movie itself, but of the reference to it in Just Friends (“I find something so resplendent in the simplicity of Nicholas Sparks’ writing, you know what I mean? Nice outfit, by the way. Rock and roll.” -Dusty), which goes to show why it ranks so low on her list. A fine watch, just not a favorite.

Dear John (2010)
Mom’s ranking: 8
My ranking: 9
According to mom, Dear John is basically The Last Song, with a different type of sad dad story and the addition of war. She wasn’t too impressed.

The Lucky One (2012)
Mom’s ranking: 9
My ranking: 7
Like Dear John, The Lucky One was too familiar and generic to be enjoyed too greatly, and mom thought Zac Efron looked like a kid! She did, however, like Blythe Danner’s supporting performance and all of the dogs, so it’s not the worst of the bunch.

The Longest Ride (2015)
Mom’s ranking: 10
My ranking: 6
Like basically everyone I know who has seen this movie, mom thought the ’40s storyline was superior to the present-set rodeo romance, which she didn’t care for at all. She liked the use of letters to tell the story, but could do without the brutish bull-riding.

The Best of Me (2014)
Mom’s ranking: 11
My ranking: 8
Ritzy mansion setting and no beach? No thanks, says mom. She also thought the casting of the younger versions of the characters was ridiculous, because they look nothing like the older actors (which, I’ll admit, did take me out of the movie too).

There is no new Sparks romance for us to enjoy this Valentine’s. The dude seems to have turned his attention to… books with soundtracks? And recommending books to Wal-Mart customers? Only time will tell if we’ll ever see another feature to add to the ranking.

Now, continuing the Valentine’s celebration with a semi-related-but-not-really list of my own…

The genre of romance has made way for many a trope. Some folks hate the conventionality and repetitiousness of it all, but there are certain tropes I never tire of, the greatest being the “hate ya ’til I love ya” romance. Not necessarily the healthiest type of relationship, but always fun to watch in films, this brand of romance usually brings plenty of wit and banter before evolving into syrupy sweetness. These are just a few of my favorite movie couples whose romances fall into this trope.

Moondoggie and Gidget from Gidget
Gidget is the quintessential surf flick, teen romance, and late-’50s summertime fluff. It also contains one of my favorite movie couples, and favorite hate-turned-love couples, which I couldn’t miss mentioning here: Gidget and her beloved Moondoggie.

They meet when he saves her from nearly drowning. Such heroism would plant immediate butterflies in the stomach of most gals Gidget’s age, but instead of falling in love with her rescuer, she falls in love with surfing.

Moondoggie isn’t too enthusiastic about the idea of a novice girl joining his surf gang, but the others welcome her with open arms, causing plenty of tension between the future couple. Eventually, they realize that they have more in common than they think, giving the film its warm ‘n’ fuzzy ending.

Susan and Ned from The Harvey Girls
She’s a wholesome gal serving meals to weary travelers at the local Harvey House, having moved West for love, unsuccessfully. He’s the local saloon proprietor, engaged in a battle with the Harvey House over whether his establishment should be allowed in town.

They have a lot to disagree about. But Ned begins to see the value of the Harvey House, rather than seeing it as a competitor… and he begins to see something special in Susan.

Judy Garland could sell romance like practically no one else could. Meet Me In St. Louis, For Me and My Gal… so many of my favorite musicals include Garland’s dreamy-eyed performances. The plot offers an interesting source of feud for the couple, but it’s Judy that really makes the viewer root for Susan and Ned.

Henri and Catherine from I Was a Male War Bride
Henri is a French Army captain, Catherine Gates a lieutenant in the Women’s Army Corps. When they’re assigned to work together, they must travel the country by motorcycle, Henri riding in the sidecar since he’s not American.

Both are repulsed by the idea of having to work together, Henri saying, “The very idea of any connection [between he and Catherine] is revolting!” Not the best way to start a road trip, and the troubles they encounter along the way are no help. But being trapped on a motorcycle brings them closer together, and sure enough, Henri starts to warm up to Catherine.

As the title of the film suggests, in a wacky turn of events, Henri must become a “war bride” in order to wed his American love. (There’s no protocol for “war husbands.”) Even in his famously ugly war bride wig, Cary Grant wins over his leading lady, and the coupling wins over the viewer.

Peter and Melsa from The Mad Miss Manton
Melsa Manton is one of Barbara Stanwyck’s most vivacious characters, a society gal with a budding knack for solving crimes. On a late-night dog walk, she saw a body… which then disappeared without a trace.

Peter Ames is the journalist who doesn’t take her sleuthing seriously, and publishes an editorial dismissing her as a prankster. Naturally, Melsa doesn’t take too kindly to Peter’s editorial, nor the man who wrote it.

Peter and Melsa both search for the truth, from opposite sides of the aisle, butting heads along the way. But as the trope goes, you can only do so much head-butting before hate turns to love and head-butts to smooches!

Jean and Lt. Mallory from Pillow to Post
My most recent film discovery on this list, Pillow to Post has to be Ida Lupino’s most adorable film. I can’t say that definitively since I haven’t seen every one of her films, but I’d be willing to bet on it.

Jean (Lupino) is a traveling saleswoman struggling to find a place to stay when a potential buy requests that she stay in town a few days to discuss the sale further. When the only vacancy she can find is reserved for married couples with no children, she convinces Lt. Mallory (William Prince) to pretend to be her husband, just until she gets the key to the place.

A wrench is thrown in that plan when Mallory’s Colonel happens to be staying at the same place. Forced to keep up the marriage charade longer than planned, Jean and Lt. Mallory run into plenty of mishaps, but also begin to fall in love. 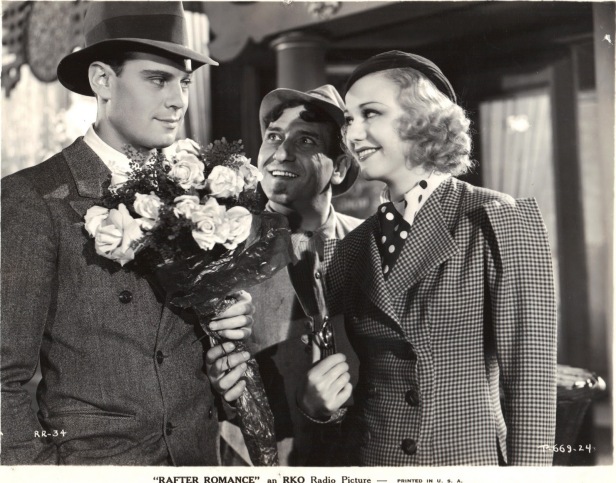 Mary and Jack from Rafter Romance
It’s natural for roommates to get into spats. But when two down-on-their-luck folks of the opposite sex in 1930s NYC become roommates… well, that’s even more complicated.

When they do finally meet, sparks of both anger and romance fly, with the pair eventually figuring out that they’re made for each other.

Theodora and Michael from Theodora Goes Wild
Theodora Lynn is a small town gal who has published a scandal-making serialized novel under the pseudonym of Caroline Adams. On a trip to New York to meet with her publisher she’s introduced to Michael, who is illustrating the novel.

Introduced under her pseudonym, she’s fairly sure her secret is safe… until she returns home to find that Michael has tracked her there!

The relationship between the two flip-flops between near-hatred and heart eyes, but it all ends happily, of course. Irene Dunne and Melvyn Douglas do a fantastic job of selling this screwball romance.

So, whether you’re in a love-hate relationship like those listed here, a tearjerker of a romance that could have been written by Sparks, or no relationship at all like your friendly neighborhood blogger here… happy Valentine’s Day! Eat lots of chocolate and watch a few movies.