Joe’s dad, Tom Couhglin (Brendan Gleeson), is a police captain. He tries to steer his son away from a life of crime, but is unsuccessful.

When Albert White’s rival, Italian crime boss Maso Pescatore (Remo Girone), tries to rope Joe into his feud with White, Joe makes a plan to leave town with Emma. Will he succeed and “go straight” in California, or fall into a life in the city’s underbelly?

Based on the novel of the same name by Dennis Lehane, Live By Night was written and directed by Ben Affleck.

I tend to enjoy Denis Lehane’s books, and I loved the book version of Live By Night. When I learned that it was being made into a film, I was pretty skeptical due to the casting choices that were announced, and Ben Affleck’s position as writer, director, and star.

I thought Affleck was all wrong for the lead role, and now that I’ve seen the film, I still think it would have been better-served by a different leading actor. I did find many of the other performances to be better than expected, though. Sienna Miller does quite a good job as Emma. I loved Miguel, in his debut role as an actor, as Graciela’s brother. TMP favorite Chris Messina is another nice addition to the cast, playing Joe’s sidekick and adding touches of humor to the film.

The film did avoid one of my worries, when it came to Affleck’s casting: he is much older than Joe was in the beginning of the book. The issue of casting an actor for “young Joe” or trying to pass Affleck off as an early-twenty-something is avoided by not sticking to as rigid a timeline for the action. I don’t remember any obvious reference to Joe’s age, just general historical reference points like the end of prohibition, which did work in the film’s favor as an adaptation.

While the timeline is less clear on the screen than on the page, the film does a good job of preserving many of the surprising turns that kept me gripped by the book, making for a decent page-to-screen depiction. I was pleasantly surprised by Affleck’s script as it made a few necessary changes while staying true to the book’s plot.

One big issue I did have with the film was the relationship between Joe and Graciela. It felt weak, emotionally underdeveloped compared to what I remember from the book. I think this is both an issue of chemistry between Affleck and Zoe Saldana and a consequence of packing a pretty thick book into a comparatively short movie. Their storyline follows the same general points, but detail is lost.

Live by Night succeeds most in style, with nice costume design, makeup, and set decoration. In comparison with the book, and with the classic Warner gangster dramas it attempts to emulate, it’s an underwhelming film. But as a fan of the book, I did find it worth watching, and generally a decent adaptation. 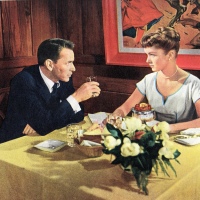