Fred C. Dobbs (Humphrey Bogart) is having poor luck down in Tampico, Mexico. When he’s hired on at an oil field and meets a fellow American named Curtin (Tim Holt). Together, the men stand up to the fella who hired them, Pat McCormick (Barton MacLaine), when he tries to keep the money he owes them.

Soon, they’ve got a plan to put that money to good use. They call on an old gold prospector, Howard (Walter Huston), to help them prospect in the Sierra Madre Mountains.

Using their money on a stash of guns and other supplies, the men head off into the mountains, where tensions arise between them.

The Treasure of the Sierra Madre was directed and written by John Huston, based on the novel of the same name by “B. Traven,” a pseudonym for an unidentified author.

Would you believe I bought this film on DVD in 2015, and it’s taken me this long to give it a re-watch! I was well overdue. Several years overdue!

So, I made it a double feature with Blowing Wild. The films pair together pretty well — both tales of down-on-their-luck Americans, south of the border, finding trouble in their quests to find work.

Of course, with John Huston at the helm, Bogie starring, and a much less melodramatic script, this would be the “A” picture of the two, despite Blowing Wild‘s Barbara Stanwyck/Gary Cooper/Anthony Quinn/Ruth Roman quartet of star power.

To me, nothing says “adventure” like a hunt for treasure. Bogie and his fellow adventurers in this film are hunting for gold. It’s exciting to watch.

But, it’s also not the heart of the film. More than a pure adventure, this is a drama of some of the darker corners of human nature, packing a heaping load of selfishness and greed into its rugged set of characters.

Bogart, of course, gives a strong performance. “Fred C. Dobbs don’t say nothin’ he don’t mean,” and Bogart brings authenticity and depth to the character the whole way through. Tim Holt does also nice work in his supporting role.

But most outstanding of all is Walter Huston, being directed to the Academy Awards podium by his son, John. (Father and son were both winners that night, Walter taking home the Supporting Actor trophy, John winning Best Director and Best Screenplay.) Throughout the entirety of his time on screen we see not Walter Huston, but a weary old miner looking for one last, big discovery.

The Treasure of the Sierra Madre is a well-crafted film overall, with a strong script, great direction, and wonderful cinematography, but it’s especially worth watching for its stellar performances. I’m kicking myself for waiting so long to re-watch it, and am sure I won’t let several years pass before watching it again! 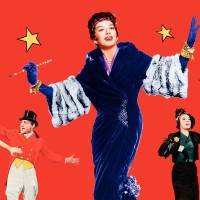