Shirley MacLaine and Julia Stiles star in this romantic dramedy about a girl (Stiles, in the title role) who wants to escape her uber-eccentric, mildly crazy family in favor of a life of normalcy.

I could tell right off the bat that I was going to like this film, because even the first scene was hilarious.

It begins with a fight between young Carolina and her sister. Shirley MacLaine leaves her two grandchildren in an alley with a knife, telling them to kill each other if they hate each other so much. Her deadbeat son then shows up and leaves yet another baby in her care — in a laundry basket, no less.

And then it jumps ahead it time. Carolina is still buttoned up, and much more responsible than her family members. She’s working as a TV producer. The new baby from the alley is all grown up to tween-age and speaking in a fake British accent. The family is as crazy as ever.

What follows is all at once hilarious, a bit dramatic, a bit romantic, and a bit chaotic. There’s even a bit of heartbreak thrown in. The pace never slows, and the performances are consistent throughout. The narratives of dysfunctional family, dysfunctional career life and ever-changing relationships all work well together.

Maybe I’m just a sucker for early-Millennium films. Don’t let the above poster fool you — it doesn’t fall off of the corny cliff! I really enjoyed this one and would definitely recommend it. It’s available on Netflix instant, and on sale for $4.99 (!) on Amazon. 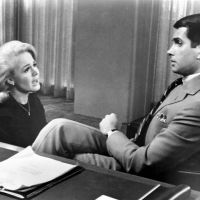