Lucia Harper (Joan Bennett) is a middle-class wife and mother who lives in the idealistic commnity of Balboa, California, about 50 miles from Los Angeles.

As the film begins, a narrator tells us that Lucia drove into LA about a year ago. In a flashback of this trip, we see her meet a sleazy scoundrel named Ted (Henry O’Neill) in a bar and warn him to stay away from her daughter, Bea (Geraldine Brooks). He’s willing to leave Bea alone… if Lucia will pay him.

Lucia refuses to give Ted any money and heads home to tell Bea what happened, but of course Bea doesn’t believe a word of it. That night, Bea sneaks out to meet Ted.

The next morning, Lucia finds Ted’s body and assumes that Bea must have killed him. Lucia will do anything in her power to protect her family from facing the consequences of Ted’s death, even if that means getting wrapped up in a blackmail plot with a stranger named Martin Donnelly (James Mason) and his boss, Nagel (Roy Roberts).

Max Ophuls directs 1949’s The Reckless Moment. The film is based on a story called “The Blank Wall,” which was originally published in Ladies’ Home Journal. Mel Dinelli, Robert Kent, Henry Garson and Robert Soderberg collaborated on the adapted script.

The Reckless Moment boasts and incredibly engrossing plot of murder and scandal. There isn’t too much of a mystery element here since we know that Ted has died and we know how he died, but we’re kept anxious over how it will all work out for the family. Will Lucia take the blame, or will her daughter face the consequences?

All of the drama is carried off by two great leads, Bennett and Mason. Geraldine Brooks also gives a very good performance. The only weak link in the cast is David Bair as Lucia’s son David Harper, but his character isn’t terribly important. Bair’s delivery is unnatural, but since his role is pretty small it doesn’t do much to bring the film down.

Bennett is the star who really shines here. The determination of her character to solve this problem for the sake of her family is the film’s driving force, and Bennett makes it so the viewer can feel that determination radiating from her character. Her expressions show her character’s anguish so perfectly.

A great score and beautiful cinematography also work in the films favor (minus the use of some very obvious green screen work). The scenes of Ted’s late-night meeting with Bea and his death are some of the best in terms of cinematography. Those shadows!

The Reckless Moment is a pretty great watch. It’s got a wonderful cast, a somewhat complex plot of murder and blackmail, and it is visually very nice to look at. It isn’t a film free of weaknesses, but I’d recommend it for any fan of drama or noir. The score: 4/5 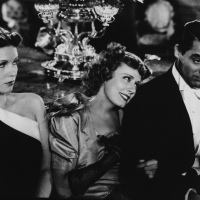