Travis Blue (Ben Johnson) and Sandy Owens (Harry Carey, Jr.) are horse traders who have been hired on as wagon masters by a group of Mormon settlers headed to a valley on the banks of the San Juan river in Utah.

Traveling through rough, unfamiliar and unsettled territory comes with more than its share of challenges, and the group struggles along their journey. As they travel, they’re joined by other travelers. One joining party is Dr. A. Locksley Hall (Alan Mowbray) and his medicine show, which includes a lovely woman named Denver (Joanne Dru).

The murderous Clegg family (Charles Kemper, Fred Libby, Mickey Simpson, James Arness and Hank Worden), who are known to be robbers and trouble-makers, are also on the trail.

Sandy and Travis do their best to protect the Mormon settlers from all of the journey’s dangers and get them safely to their “promised land.”

John Ford (The Grapes of Wrath, Stagecoach) directs 1950’s Wagon Master. The film was written by Frank S. Nugent (The Searchers) and Patrick Ford (North West Frontier) from a story by John Ford.

I find Wagon Master‘s subject matter to be incredibly interesting. There aren’t a ton of movies about Mormonism, and even fewer about Mormons moving West during the post-Civil War period of expansion. This film was inspired by the “Hole-in-the-Rock” expedition of 1879/1880. The film offers a very sympathetic portrayal of the group, emphasizing prejudices against them as well as their strength in community-building. The theme of “community” pops up quite frequently in John Ford’s films, so I’m not surprised he was the director who chose to take on a story about the Mormon religion.

Wagon Master‘s story is not one of high drama or constant action. Instead, the film is an exploration of the perseverance and teamwork that this expedition across rough terrain called for. This lends a bit of a slower pace to the story, but the film isn’t anywhere near boring.

The film holds the viewer’s attention with expert photography and a likable, talented cast. The cinematography is downright beautiful, displayed in crisp black and white. In typical Ford fashion, the film is visually stunning. Most of the actors used in this film were best-known for their supporting roles in other films of the director. There are no “big stars,” which helps keep the focus on the group as an ensemble rather than any one character’s journey.

The unique subject matter, visual beauty and slow-but-steady made this a good watch for me. It wasn’t at all what I expected, having known little about it previously other than the fact that it was directed by John Ford, but I enjoyed it a lot. The score: 4/5 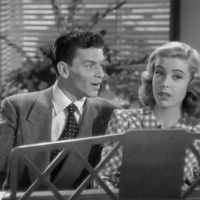