…because the creators of The Apple did. In just fourteen years between the film’s release and the year in which it is set, the minds behind this film thought that all musicians would transform into futuristic, glitter-obsessed, screeching creatures.

But this film doesn’t follow the two gloriously-costumed “artists” in the image above. Instead, it follows a Canadian singing duo with a hippiepish aesthetic, who write songs of the now-out-of-style genre of the love song.

Making their way from the tiny town of Moose Jaw, Alphie and Bibi bring their romantic ballads to America, competing in the 1994 Worldvision Song Festival. Their hopes of success at the festival are ruined when Mr. Boogalow, a powerful music industry man, rigs the contest for his group (the brilliant duo pictured in the first screen capture above) to win.

But all hope is not lost, for Mr. Boogalow realizes that there is potential to make a money off of the sentimental jams of Alphie and Bibi. He wants to sign them to his label, Boogalow’s International Music, but success may come with a price as Alphie and Bibi begin to discover the darker side of the music industry.

Menahem Golan co-wrote and directed The Apple along with Coby and Iris Recht, who drafted the original script and contributed their songwriting skills to the film.

The music of this strange and wonderful film mixes glam rock, disco and spy film theme song styles with classic love song melodies to create tunes that can best be described as “baffling.” There is so much corn in the film’s musical numbers that I don’t feel like I can properly describe it. So instead of trying, I’ll share a couple of clips:

Everything about this film is weird. The acting is just plain bad, especially that of Vladek Sheybal as Mr. Boogalow (but of course, this means that I adore him). One IMDb user describes the acting as “Not Quite Ready for Community Theatre,” which is a perfect description. The music, as evidenced above, is hilariously awful.

But all of that being said, I haven’t laughed so hard at a film in a long time. I laughed so hard that I completely lost my breath and my chest began to hurt. I literally had to pause the film to recover, and that was just from the first musical number.

The Apple is the definition of “so bad it’s good.” It’s so strange that you can’t help but love it if you’re in any way a fan of bad movies. It mixes the sappy love story of Grease, the music biz commentary of Josie and the Pussycats and the camp factor of The Rocky Horror Picture Show — on “SPEEEEEEEED!,” as Bibi would say. A true Classic of the Corn. 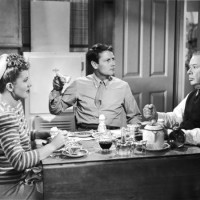