The Common Law is a pre-code drama which serves as a critique of society’s conventions, especially in relation to marriage.

Constance Bennett is Valerie West, the live-in girlfriend and model of painter John Neville (Joel McCrea). Valerie and John are American ex-pats living in Paris when they meet and decide to live together, much to the chagrin of John’s sister, snooty high-society girl Claire (Hedda Hopper).

John loves Valerie and would like to marry her, but Valerie stands her ground. Love isn’t enough for her — she wants to be sure that a marriage will last if she’s going to enter into it. Claire sees the relationship and Valerie’s work as a (sometimes nude) model as far too scandalous, and plots to break the couple up in order to save the family’s name.

While pointing out the flaws of the rich and covering scandalous subject matter was fairly commonplace in 1930s cinema, this film still seems far ahead of its time and is still relevant today.

Valerie has an internal struggle over whether not to marry simply for the protection and stability that it will provide, especially with such a rich suitor after her. Should she live the fun, free life that she loves and has been enjoying, or should she just submit to the societal expectation that she will marry?

Beautiful Constance Bennett is the stylish stand-out of the film with her portrayal of Valerie as strong-willed but somewhat conflicted. There are no particularly bad performances in this film, though none shine quite as bright as Constance.

The script does leave some to be desired, but the journey of Constance’s character is well-done. She suffers no major consequences for her scandalous past, which was a good decision on part of the writers as it further solidifies the society-critical aspects of the film.

The plot is interesting enough, but the characters aren’t quite as well-developed as they could be. Hedda Hopper’s Claire is a one-note, spending all of her screen time criticizing Constance.

Just as with the performances themselves, Constance’s Valerie is the stand-out once again; her character is the most interesting, and the efforts of her fellow cast members could have done nothing to elevate their characters to her level.

The Common Law is worth watching for Constance Bennett and it’s societal critiques, but if you’re looking for a particularly wonderful pre-code, look elsewhere. The score: 3/5 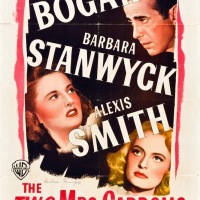