Linda Paige (Rosalind Russell) is a very successful star of the stage, but her latest play has hit a few speed bumps. It needs some rewriting, and the writer — the naive, up-and-coming Gaylord Esterbrook (James Stewart) — has been called in to the city from his tiny hometown of Redfield, Minnesota to do the job.

Producer Richard Benson (Clarence Kolb) ultimately decides to pull his backing from the play. He’s disturbed by the fact that a man from a town of Western flicks and whittlers, population well under a thousand, has written a play about high society.

Linda, however, is determined that it can be a success, and endeared by Esterbrook’s lack of exposure to big city life. She inspires the rest of the cast to perform the play without Benson, to have faith in the its hit potential and form a cooperative agreement.

Will the play be a hit, and what will its success (or failure) mean for the budding friendship between Linda and Gaylord?

No Time for Comedy was directed by William Keighley. The script was penned by Julius J. and Philip G. Epstein, twin brothers and frequent collaborators also responsible for such films as Casablanca, The Strawberry Blonde, and Arsenic and Old Lace.

No Time for Comedy is kind of an odd little film. The first half of it is incredibly charming. The chemistry between Roz and Jimmy is very sweet, both coming across as kind, genuine people — a sort of innocent and wholesome, easy-to-love pair. There’s even a very cute proposal scene in which Linda proposes to Gaylord.

But the tone shifts in the second half of the film as Gaylord becomes disillusioned with his comedy-writing career, starts acting quite insecure and becomes convinced that he should be writing “important” things rather than witty comedies to lift the audience’s spirits. Linda is very patient with him and tries to encourage him as best she can, but the second half of the film loses some of that magic from the first as she puts 100% effort into the relationship and he puts maybe 0.5%.

I wish that the sweetness and romance of the first half of the film had been preserved rather than crumbling into a story about an unhappy marriage between a devoted wife and a cynical, immature husband. The film could have been a wonderful romantic comedy, but the change comes too suddenly. Gaylord’s transition from optimistic young talent to self-critical wannabe is also a bit too dramatic to keep him likable.

Still, despite the fact that the second half of the film doesn’t work quite so well, it’s is still an interesting watch. The cast is good — Roz very lovable, Jimmy doing a very good job at playing a grumpy character that’s somewhat against type for him. I can’t recommend No Time for Comedy too highly, but it may be worth a watch if you (like me) are a fan of these actors. The score: 3/5 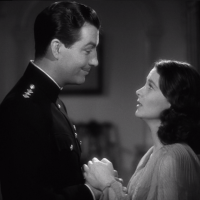