James Shannon (Buster Keaton) has always had a bit of trouble with the ladies.

There’s a certain someone who has caught his eye, but he can never seem to find the right opportunity to share his feelings with her.

Suddenly, James discovers from his attorney that he stands to inherit $7 million if he is married by 7 pm on his 27th birthday. Easy when he already has a lady in mind, right?

Not quite. You see, today is James’ 27th birthday… and when he tells His Girl (Ruth Dwyer) that he’d like to marry her, she mistakes his true feelings for a simple greedy plan to get the money.

What follows is a mad frenzy as word gets out about James’ potential fortune, and as he tries to win His Girl back.

Buster Keaton directs and stars in this silent romantic comedy. Also starring as James Shannon, and of course Ruth Dwyer as the apple of Keaton’s eye. Seven Chances is based on a play written by Roi Cooper Megrue.

Few people compare to Buster Keaton when it comes to silent comedy. He never fails to captivate me, no matter what I’m watching him in! This film is absolutely no exception.

In addition to Buster’s charisma, witty intertitles draw the viewer in at the beginning of the story. The use of repetition here is wonderful. Almost exactly the same words are used on each title as the story is told of James not being able to share his feelings, tricking the viewer into feeling like we know James and his lady pretty well by the time this relatively quick portion of the film is over.

In reality, we don’t know much about them aside from the fact that Buster is shy about his affections, but due to the film’s short running time this tactic is beneficial in making the viewer feel more invested in the story.

The intertitles throughout remain witty, but these early inclusions are some of my favorites. It’s a very clever way to begin the film.

(Bonus points: the passage of time in these early scenes is shown through the growth OF A PUPPY.)

The film is quite quickly paced and tons of fun to watch. The plot of rushing to find a wife delivers in every way the viewer expects and hopes it will. It’s hilarious, it’s cute… overall, ten kinds of wonderful. There are many mishaps to be had as a result of James’ clumsy words and sudden riches.

I highly, highly, HIGHLY recommend Seven Chances, even for those who aren’t typically fans of silents – or especially for those who don’t consider themselves fans of silents, because it has a short running time and would be the perfect “gateway drug” to falling in love with the era. The score: 5/5! 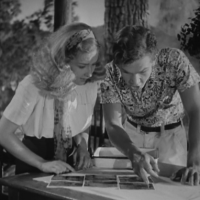